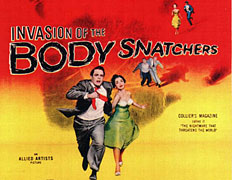 Kevin McCarthy, who died on September 10, was never a huge star, but if he’d done nothing but star in the original version of Invasion of the Body Snatchers (he had a small part in the 1978 remake, too), he’d have achieved something memorable.

But McCarthy accomplished so much more than that. Think of it, he lived to be 96 years old, and yet was acting until the very end, most recently appearing in a couple of shorts and in a full-length 2009 biopic about John Wesley, the founder of what is now known as the United Methodist church.

McCarthy worked in television from its earliest days, and he continued to work in that medium throughout his lengthy career, along with occasional work in pictures.

He’ll always be best remembered for Body Snatchers, and why not? His was a memorable role in a terrific picture. But he was a working actor in the truest sense of the phrase, and he did what he loved for more than 60 years. Truly a life and career to be celebrated.