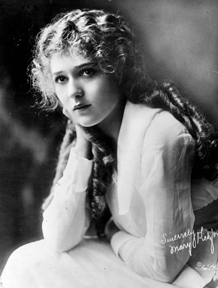 Seven years ago, a decrepit barn in Nelson, New Hampshire, was to be torn down. Before it was razed, however, a walk-through was conducted to ensure it was empty.

But as it happened, an old film projector and seven reels of century-old nitrate film were stashed away in there, and when they were discovered, a call was placed to the film department at Keene State College, a dozen miles away. It was learned that four of the seven films were considered lost, and the most important of the all was “Their First Misunderstanding” (1911), the short in which Mary Pickford‘s full name was first used.

Pickford, 18 at the time, had been making pictures for the Biograph Company, and that studio kept their actors’ names secret. The men that ran Biograph feared—and they were right, of course—that if the public knew the actors’ names, the actors would attain popularity— and the power that accompanies it.

So Pickford had previously been known to the public only as Little Mary, and it was only when she signed with a rival studio, Independent Moving Pictures, that her full name was shared with her adoring fans. And the picture that first revealed her identity was considered lost until that fateful day in 2006 when it was discovered in a barn in Nelson, N.H. Pickford’s costar in the short was the Irish-born actor Owen Moore, whom she had married just months before.

That nitrate film was placed under the care of the film preservation department at the Library of Congress, which has been working for some years on restoring it. That work is almost complete, and on October 11, 2013, the film will be screened at the aforementioned institution of higher learning, Keene State College, and if you’re wondering if it pains us that we can’t be there for this very exciting event, the answer is yes. Yes, it pains us greatly.

Here’s a brief clip from the short that will have to tide all of us over until it’s screened elsewhere or perhaps released on DVD. Enjoy.