Here are 10 things you should know about singer and actress Peg LaCentra, born 110 years ago today. She’s not as well-remembered as some other songbirds of the era, but she’s a favorite of ours. We’re featuring her music for 24 hours on Cladrite Radio, so why not tune in right now?

Jimmy Starr began his career in Hollywood in the 1920s, writing the intertitles for silent shorts for producers such as Mack Sennett, the Christie Film Company, and Educational Films Corporation, among others. He also toiled as a gossip and film columnist for the Los Angeles Record in the 1920s and from 1930-1962 for the L.A. Herald-Express.
Starr was also a published author. In the 1940s, he penned a trio of mystery novels, the best known of which, The Corpse Came C.O.D., was made into a movie.
In 1926, Starr authored 365 Nights in Hollywood, a collection of short stories about Hollywood. It was published in a limited edition of 1000, each one signed and numbered by the author, by the David Graham Fischer Corporation, which seems to have been a very small (possibly even a vanity) press.
Here’s Part 3—the finale—of “Humor Risque,” a not-so-short story from that 1926 collection. (If you missed them, you can read the first two installments here: Part 1 | Part 2) 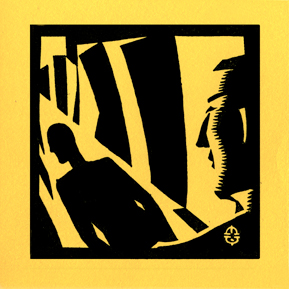 Monty sat on a lamp box at the side of the set, calmly watching. He was glad when Jackson shouted at the top of his lungs: “Lights—Action—Camera!” He loved the hum of the clicking camera and the sudden quietness that followed. There was a certain tenseness felt by every actor at this moment when the first scene of a new screen masterpiece was shot.
At the end of it Jackson heaved a sigh. The first had been perfect, he thought, but he took it twice again to be sure.
Then came the staccatic “Pull ’em!” from the head electrician, and a man seated at the large portable switchboard snapped down the big three-way switch, and the white lights died down, leaving only the deathly blue of the Cooper-Hewitts.
The assistant director, a small man, who imagined he should be the director and was fond of making that impression, handed Jackson the script. After studying it for a few moments, he called Norma from her dressing room. Monty was then sent for.
Jackson explained:
“Edwards, you make your entrance into the dive. Saunter over to a table and flop down in the chair by the piano. This’ll give us a chance to work in a laugh with the ivory tickler. Now, one of the dames comes over and tries to make you. You tell her to beat it. Then the wop who runs this dive sees you do this. He gets sore and forces Norma to go over and make the grade with you. She is supposed to be his latest protege. She’s innocent and tries the hard stuff with you, but it isn’t convincing. You laugh at her. Then you see she’s hurt. You figure out the gag the wop is pulling with her. You get confidential. She tells you the old story of how she ran away. You fall for this and give her one of your cards, stating that you’ll see her get a real try-out—if she’ll come up tomorrow. She is very grateful and promises to do so. Then you fade out of the dive.”
Jackson had gone through the action of this scene while explaining it to Norman and Monty. The cameraman was busy setting his camera and directing the electricians in placing the lights. The extras sat around languidly on boxes, chairs and, in fact, anything there was to sit upon. They told each other of the great parts they had played in their last pictures!
“And don’t forget the scene with the melody-maker,” sweetly lisped Norma, admiring herself in the small hand mirror which she carried for that purpose.
Jackson nodded.
“Now, you’ve got the idea, Edwards?” he asked.
Monty answered in the affirmative.
The action was too slow the first time, and Jackson called for the N. G. sign after the camera had turned forty feet. They tried again and it was better, much better, claimed the director. Even the assistant director thought so.
The siren sounded for lunch and as soon as the scene was finished, Jackson ordered them off, setting the return call on the set within an hour. The lights were switched off and the entire company drifted out into the street and to their different eating habitats. The afternoon passed quickly and at four o’clock Jackson came over to Monty and told him that he could leave, but to be made up and ready at nine in the morning. “The scene is back-stage. Same make-up,” Jackson said, as he hurried back to the camera.
Monty returned to his dressing room and removed his make-up. Again in his street clothes, he stopped into the office to see Gus.
“Monty, you gotta come down to The Devil Blue Inn tonight.”