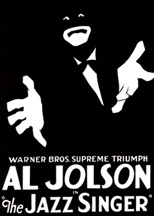 The Vitaphone process depended on the use of a separate 16-inch record that was synchronized with the film, as opposed to the later practice of imprinting the sound on the edge of the film itself.
END_OF_DOCUMENT_TOKEN_TO_BE_REPLACED