We hope you’ll make it to your local drive-in just as often as possible this summer, but on the chance that you haven’t an ozoner near you, we wanted to tip you off to Turner Classic Movies‘ Drive-in Double Features, running every Thursday night in June.

Many of the featured titles fall just outside the usual purview of Cladrite Radio, but we’re suckers for these movies, and we hope you are, too.

“Double Features” isn’t really the most accurate handle to hang on these Thursday night festivals, as they last all night long. Think of them instead as the sort of “Dusk to Dawn” marathons many drive-ins used to run on occasion back in the day.

The first group of movies, airing tomorrow, June 2, is highlighted by a group of Japanese “giant monster” movies. All times eastern. 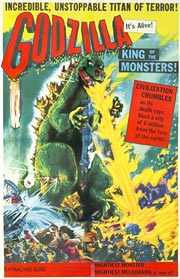 The second set of drive-in features, airing on June 9, also features a bevy of giant creatures, but these are all American features.
END_OF_DOCUMENT_TOKEN_TO_BE_REPLACED