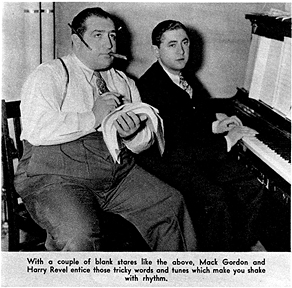 END_OF_DOCUMENT_TOKEN_TO_BE_REPLACED

We’ll admit to being suckers for all those “Hey, cheer up, chum — things could be worse!” songs of the 1930s, and we thought we’d share one of our favorites with the Cladrite Clan here today. After all, while our collective troubles might not be at quite the level of the Great Depression, between the oil disaster in the Gulf, the struggling economy, and two ongoing military actions (just to name a few), we’ve got it bad enough.

So we like the sentiments of these Mack Gordon lyrics (Harry Revel wrote the music), and figure they apply every bit as much today as they did back in the ’30s:

Wake Up and Live
Wake up and live; don’t mind the rainy patter,
and you will find it’s mind over matter!
Dark clouds will break up
if you will wake up and live.

Wake up and live; it may be love is yawning.
Up on your toes; a better day is dawning!
Don’t let up; get up and give,
give yourself a shakeup, just to wake up and live!

We like this song enough, in fact, to provide two different recordings of it for your consideration, both of them from 1937.

“Wake Up and Live” — Red Nichols and His Orchestra, feat. the Three Songies

“Wake Up and Live” — The Hudson-DeLange Orchestra, feat. Ruth Gaylor