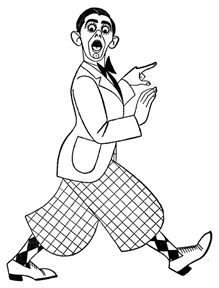 He never saw his mother or father.
Although a bundle of nerves and energy on the stage, he is very quiet at home. Likes to sit around in pajamas and rest.
His theatrical career started as a singing usher in a movie house. Also was in Gus Edwards‘s “Kid Kabaret” act. Then he joined Bedini and Arthur, a noted team of jugglers. He brought them articles to juggle. Later he became half of the vaudeville team of “Cantor and Lee.”
When working before a microphone or making a record he feels depressed because an audience can’t see his eyes.
Was once an errand boy for the Isaac Gellis Wurst Works.
His birthday, if you’re interested, is January 31. He was born in 1892 on Eldridge Street, New York. His great hobby in life is maintaining the Surprise Lake Camp for boys of the East Side. Who, like himself when a youth, never get any air or sunshine.
First started his peppy style of racing up stage and down in 1910 singing a song called “The Ragtime Violin” written by a new song-writer named Irving Berlin.
Enjoys boxing with people. Often in his dressing room when a male visitor enters he will spar with him. He would like to be a strong man.
The dream of his life for many years was to build his own home. While the house was being completed he was thinking of selling it.
He is a good business man and quick to sense an opportunity. Wall Street had no sooner crashed than he had written a book called, Caught Short. Even in his dressing room he is business-like, having a secretary, a desk and a telephone.
The first play he ever saw was The Talk Of New York by George M. Cohan, starring Victor Moore, at the Grand Opera House, Twenty-third Street and Eighth Avenue.
He has his clothes made by Mayor Walker‘s tailor.
Is fussy about food. Eats with an eye to calories and vitamines. Every so often, however, he falls off the wagon and goes in for a heavy kosher meal which he loves.
His two favorite games are ping-pong and casino. He is a swell casino player.
The first play he ever appeared in was Canary Cottage, written by Earl Carroll.
Is always running to a doctor for something or other. One day a doctor examined him and said: “There’s something wrong with a gland in your throat. That’s the reason your eyes bulge. But I’m happy to say that I can cure you.” Cantor looked at the doctor and before racing from his office said: “You don’t fix that gland. I should pay you yet to take away my livelihood. No, sir! Good-bye!”
He would like to be the founder of a new religion.
Is a hard worker on the stage. When he was in the last Follies he said to a friend: “Drop around any time. I’m always on.”
In his new home which he calls, “The House That Zeigfeld’s Jack Built,” the bathroom contains every type of a shower. He is able to take a shower standing, sitting, leaning or reclining.
He hates bad wine, bad women and bad songs. Especially bad songs.
Has a passion for hats. His dressing room is generally crowded with special made headgear both for street use and for comedy purposes.
The ambition of his life is to be the father of a boy. He has five daughters. They are Marjorie, Natalie, Edna, Marilyn, and Janet. Marjorie and Natalie were named after relatives. Edna, because it was a pretty name. Marilyn was named after Marilyn Miller. Janet was named after the nurse.
After his fifth daughter was born one wit wisecracked: “Cantor is trying to raise his own Albertina Rasch ballet.”
In his home he has a special room where he keeps copies of My Life Is In Your Hands.
He has only one mark on his body. It is a scar on his forehead, a result of his wild childhood days.
Although he is worth two million dollars, his signature on a check isn’t worth a penny. His checks must be signed by Dan Lipsky who is his proxy for life.
In his book, My Life Is In Your Hands, he remembers the story of his life from two years before he was born.