This New York Times obit of a memorable New Yorker is well worth your time. Take our word for it — you should read it. 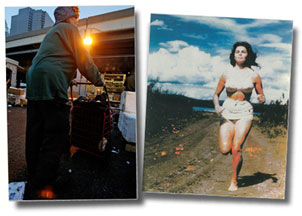 The fish men see her still, their Annie, in the hide-and-seek shadows of South Street. She’s telling her dirty jokes and doing anything for a buck: hustling newspapers, untaxed cigarettes, favors, those pairs of irregular socks she’d buy cheap on Canal. She’s submitting to the elements, calling out “Yoo-hoo” to the snow and the rain and her boys.

For several decades, Annie was the profane mother of the old Fulton Fish Market, that pungent Lower Manhattan place fast becoming a mirage of memory. Making her rounds, running errands, holding her own in the blue banter, she was as much a part of this gruff place as the waxed fish boxes, the forklift-rocking cobblestones, and the cocktail aroma of gasoline, cigarettes and the sea.

Some ridiculed and abused her; others honored and protected her. Young men new to the market were occasionally advised to make acquaintance with Annie’s prodigious breasts; kiss them for good luck. And the veterans, young men once, often slipped her a dollar, maybe five, for a copy of a fresh tabloid; pay her for good luck.

Young and old, they all had heard that the faded color photograph on display at Steve DeLuca’s coffee truck—of a striking young woman, a raven-haired knockout in a two-piece bathing suit, running barefoot against a glorious sky—was of Annie in her younger days, decades before her dark fish-market terminus. But some could not see the coffee-truck goddess in this bent woman at shadow’s edge, clutching the handle of the shopping cart she used to hold wares and provide balance, wearing a baseball cap, layers of sweaters, and men’s pants, navy blue, into which she had sewn deep, leg-long pockets to keep safe her hard-earned rolls of bills.

The supposed link between pinup and bag lady sounded too much like an O. Henry tale of Old New York, and begged too many questions. …