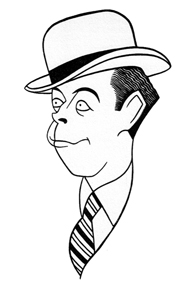 His real name was Joseph Lopez. Was orphaned at the age of four. Then adopted by a family named Cook in Evansville, Ind. He spent his teens in a cold water flat on Amsterdam Avenue near 135th Street.
He is extremely superstitious. He knocks wood. Will not walk under a ladder for all the money in the world.
Talks exactly the same offstage as he does on. With a slow drawl.
When a youngster in Evansville he organized a kid show. The theater was the family barn. He charged five cents for admission and actually made money. At fifteen he was playing on the Keith circuit with his brother Leo.
He always wears a cap. Wears a hat on the street very seldom. On each occasion he felt as conspicuous as a kid in his first long pants. He wears suspenders, unshined shoes and $200 suits.
Can often be found in a shooting gallery pecking away at the clay pipes.
Dave Chasen can’t do the funny hand business used in Rain or Shine without him.
He lives at Lake Hopatcong. Drives home every night after his performance if he’s playing in town.
Made his début in show business as grip carrier for the Great Doctor Dunham. Before the doctor give his spiel on the magic medicine which cured corns, colds and ingrown nails, he did a juggling act. He finished the season stranded in a tank town. He was paid off in medicine bottles.
He has worn out forty-one pairs of roller skates. Seventeen bicycles. Two motor-cycles. Eight automobiles and four motor boats.
His first vaudeville salary was $50 a week. His latest was $2,750.
They’re still looking for four Hawaiians who can imitate him.
He is one of the most versatile performers in America. Here are merely a few of his feats: Plain and fancy hand juggling. Japanese foot juggling. Sharpshooting from a slack wire. Trapeze balancing. Propels a huge ball up a fifteen foot incline with his feet. Plays various musical instruments. Exhibits skills as a clog dancer. Ditto as an acrobatic dancer. Furnishes motive power for a foot propelled merry-go-round. Does various feats of magic. Catches (or misses) lighted matches with his mouth. Extracts music from an insane Ferris wheel contraption. Casually tosses a bouquet to himself with one foot.
His understudy is the Barnum & Bailey Circus.
His parents were in the show business. His father retired from the stage to become a successful portrait painter.
Has a passion for a good cook stove. Loves to cook spaghetti, chili-con-carne and mulligan stew. Has cooked for as many as three hundred people at one sitting.
He is very modest and blushes very easily.
Has a piano on which he makes every guest burn his signature. The piano has 948 names on it. Including such as Ring Lardner, Gilbert Seldes, Robert Benchley, Babe Ruth, Charles MacArthur and Hudson Maxim.
He has many week-end parties at his home. Generally has from five to a dozen males but never a woman.
Dave Chasen, one of the funny fellows in his act, is his right-hand man. Dave even carries his money for him.
His major delight is discovering an odd restaurant. Is seldom seen at any prominent eating place. Will walk miles to find a hole-in-the-wall beanery where a newfangled dish is offered.
One thing he can’t stand is the sissy type of man. Especially the fellow who says “Tummy” for stomach. “Hanky” for handkerchief. He thinks there should be a law.
His dressing room is plastered with signs saying: “No Smoking.” “Positively No Smoking.” “Absolutely No Smoking.” There is one large sign which has “No Smoking” written out in twenty-six languages, including the Scandinavian. He doesn’t mind if you smoke.
He is quite an artist at short-changing.
He never saw a real Hawaiian. Once saw a Hawaiian act in vaudeville. The Hula dancer was a dazzling blonde who wore a wig. One of the Hawaiians was http://en.wikipedia.org/wiki/Buddy_De_Sylva, the song writer.
His favorite drink is a glass of real beer. After the third stein he sings the original version of “Frankie and Johnny.”
Has only one servant at his country home. This servant is the butler, the cook, the chauffeur, etc. The servant has a different name and uniform for each job.
He was the second white man to play the ukulele.