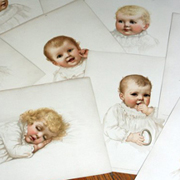 There’s a persistent rumor out there that Humphrey Bogart was the model for the Gerber baby—that hand-sketched icon that is so closely associated in the mind of the public with the very successful baby food company.

It’s not so. Though Bogart’s mother, Maud Humphrey (proud of her heritage, she opted to retain her maiden name after marrying Bogie’s father, Dr. Belmont DeForest Bogart), was a successful commercial artist, her life and career predated the Gerber company. She did use young Humphrey as a model for ads in a campaign for a now-forgotten brand of infant mush, though: Mellin’s Baby Food.

So who was the model for the Gerber baby? Watch the following CBS Sunday Morning segment and learn.