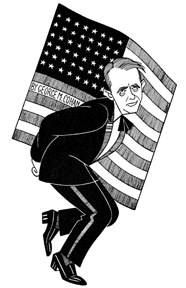 The “M” stands for Michael. Hates to be called George by anyone he thinks is not entitled to use it.
Comes from a family of hoofers. Later famous as “The Four Cohans.” He was always on the stage. When only a baby his parents parked him backstage in a basket while they did their act.
He is very charitable. Never gives to societies, but takes care of individual cases. This is one subject he will not speak about. Yet without exaggeration he has given away over a million dollars.
At rehearsals he is in the aisles, on the stage and once was discovered halfway up the proscenium.
His finances are in the hands of Dennis O’Brien. Never knew how much money he had and doesn’t today. If left to himself he would write his fortune away. His is one of the wealthiest men in the show business.
His shoes cost $45 a pair. They are handmade. Orders half a dozen pairs at a time.
He sent George Fuller Golden to Colorado for his health. Did this unsolicited and handed Golden $10,000 in cash. Told him to write for more when that was gone. This is merely one of thousands of cases.
Gave his mother the entire royalties of Get Rich Quick Wallingford as a Christmas present.
First man to use the American flag to “stop the show.” Also the first to glorify it on stage. He has been called the “Yankee Doodle Boy.” Is also said to be a representative American type. Of all things, he was born on July 4. The year, 1878.
Nothing that he ever wrote had an unclean line or situation.
He hasn’t temperament. Doesn’t wear the high hat. Just the same old felt or derby tilted on the side.
Prefers the company of theatrical folks.
He writes all his stuff with a yellow pencil on yellow paper.
He is the only man who ever turned out musical comedies single-handed. Beginning with Little Johnny Jones, he has written the music and lyrics, the book, staged the dances, rehearsed the cast and orchestra, arranged settings and costumes, and played in them.
Wrote over one hundred plays and signed only forty.
A great deal of his charity, in addition to money, has been in the form of song numbers and acts. Gave these away to help struggling performers. He didn’t receive any payment nor credit lines. A popular pastime was sending him manuscripts to be “Cohanized.”
After watching a show at a dress rehearsal, he knows exactly how much of it will click. Has never gone wrong on one of these predictions. No man in the world understands the audience as well as he.
He rejected the play Broadway and advised William A. Brady not to produce it.
Was the first actor to own an automobile. He paid $2,000 for it. People said only an actor would do a thing like that.
He does not mourn for “the good old days.” After over twenty years on Broadway he can still compete with the new blood. He considers Broadway of today merely a mess of lights.
Cannot and will not write a part for a Jewish character. He claims he doesn’t understand them.
Is a baseball an prize-fight fan. He is very clever with his fists.
Once he was playing baseball and objected to the presence of a colored chap because the fellow got on his nerves. He tolerated him for two innings. He then picked up a bit and chased him out of the park, down two blocks. All of the players were anxious about Cohen’s safety. When he got back they told him the fellow he chased was Joe Walcott, the prize fighter.
Was the first man to collect royalties for vaudeville skits.
Isn’t particular about his clothes. But is fussy about his haircuts. Often has his Astor Hotel barber cut it three times before he is satisfied.
He has written over a thousand songs. He thinks of the music and lyrics of a new song at the same time. The bugle called and he wrote “Over There” in five minutes. The original copy of “Over There” is now in the Harvard Museum among rare and precious American manuscripts.