“NEVER GIVE A SUCKER AN EVEN BREAK” 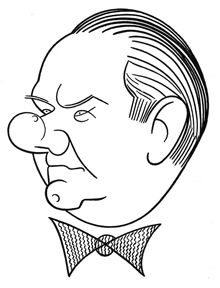 He can’t rehearse his part in a play or picture without holding a cane in his hand.
His auto bears a California license plate merely because he likes the color of it.
Started his theatrical career as a juggler. At the enormous salary of $5 a week. Out of this he had to pay an agent a dollar and a half commission fee. His latest salary was $5,500 weekly as the star of the Earl Carroll Vanities. The agent’s making more also.
He wears snake-skin shoes. Never wears garters. Calls his socks, “droopies.”
Is an excellent caricaturist and could probably earn a living by drawing if he so desired.
Good comedy, he believes, is merely a matter of instinct.
He traveled around the world twice. Once making the westward passage. The other time the eastern passage. To him one of life’s little mysteries is why they lost or gained a day on the way around.
Wears silk underwear and sleeps in it. Sleeps lying flat on his belly with the pillow against his chest.
One of his first jobs in the theater was in a beer garden, the Fortesque Pavilion, Atlantic City. His task was to go in swimming and cry for help. Then two actors would rush to his aid, carry him back to the beer garden and revive him on the stage there. While this revival act was going on the waiters would sell beers to the crowd that had followed the drowning man to the pavilion.
Washes himself with black tar soap. Perfumes his bath with pine needles.
Is always juggling things by force of habit. Has six lemons on his bureau at home. When alone he amuses himself by juggling them.
Thinks the best French food is served in England. The best German food in America. And as far as American food is concerned he’d rather eat tall grass.
His nickname is “Pokey.”
He ran away from home at the age of eleven and became a hobo.
During his hobo career he was regarded as a Beau Brummell, because he washed once a day.
He made the longest jump on record. Jumped from Freemantle, Australia, traveling thirty-eight days and thirty-eight nights, to play a one-night stand in Syracuse, N. Y.
His two favorite expressions, which he made popular, are: “It ain’t a fit night for man nor beast” and “Never give a sucker an even break.”
He has a face that caricaturists love.
The thing that annoys him most in life is a radio. When entering a house that has one, he politely requests that it be turned off. He owns two radios. Has one in his dressing room. The other at home. They are to amuse his guests when he isn’t present.
He once passed the night in an Egyptian pyramid.
Recently he received a letter from the United States Government about his income tax. He had overpaid it at $1,250.
He eats only one meal a day. Never has breakfast or lunch. Only dinner. Occasionally, however, after the theater, he will have cheese, crackers and beer.
No matter how hard he tries he can’t raise a mustache. Has over a hundred false mustaches as part of his theatrical makeup. He wears the mustache, not on his lip, but on the tip of his nose. Thy have a trick clasp.
His favorite actor is Mussolini.
Among the things that burn him up and leave him cold are mustard, folks who get plastered on one highball, picnics, hand-embroidered handkerchiefs, chorus girls with curls, “Mammy” singers with Jewish accents and a pair of tight pants.
He played the stock market once. Then he bought five shares of stock on a tip. Almost went into a panic the next day when he couldn’t find the stock listed.
He once saved his life by juggling before a wild tribe in Africa.
He never smokes. Except when rehearsing a show or making a picture. Then he is an inveterate smoker, lighting one cigarette with the butt of another.
Like John Held, Jr., his library is in his bathroom.
While in Hollywood making pictures he received a broken neck. Today he can only turn his neck halfway to the left. He can, however, make a complete right turn.
He is the possessor of a Phi Beta Kappa key which he found.