Florez Ziegfeld Archives ⋆ Cladrite Radio
Skip to content
Sidney Skolsky was a former Broadway press agent turned columnist who made his living writing profiles he called “tintypes” of Broadway figures like Flo Ziegfeld (see below), Eddie Cantor, and Irving Berlin. In 1932, he moved west to Hollywood, where he continued as a columnist and became a movie producer as well (some claim it was Skolsky who first nicknamed the Academy Award “Oscar”).
But his book Times Square Tintypes, which was published in 1932, collected his Broadway columns, and like In Your Hat, the 1933 tell-all memoir by Sardi’s Hat Check Girl to the Stars, Renee Carroll, it’s a great time-capsule look at an exciting era in New York City cultural history.
The introduction that precedes the book’s first chapter below was written by Gilbert Wolf Gabriel, who worked with Skolsky at the Evening Sun. Gabriel went on to write for Vanity Fair, The New Yorker, and many other publications. He eventually became a drama critic of some note.
INTRODUCTION
I am not here to introduce Mr. Skolsky, the author of these subsequent sketches. Like all true biographers, Mr. Skolsky has a passion for self-effacement. He will hiss me for disclosing him in even the most general terms.
It is my theory that all good Broadway columnists—a race apart—are small of frame, soft of voice, racy with all the sophistication of the naïve-at-heart, with eyes that are incurably big with the wonder and glee of what they see in that fabulous district, the vicinity of Times Square. Mr. Skolsky is a favorite Broadway columnist, and he looks his likable part.
On The Sun, we used to leave Mr. Skolsky to his own sly devices. It would be better fun to wait and see what new personality he’d choose to lightning-sketch and pin up on the New York sky line each succeeding week. He was—still is, in his new-found quarters on The News—inexhaustible about that business. His world brims with possibilities for his peculiar sort of portraiture. His asylum of the great and the near-great will never run empty. He will always, I”m sure, greet every up-and-coming understudy with her literary tintype before she is six paces on her way to stardom.
The charcoal with which Mr. Skolsky draws is a native product. It can be made out of nothing else than Broadway’s compressed soot. And he wields it with a hand grown exceedingly quick and sure in the nervous racket of Broadway crowds. His wit has the telegraphic tempo which insures clean and telling strokes, and I have yet to see a single smudge of dirtiness in any of his shadows. More astounding still, he does without malice . . . in a territory where malice is both the coin and the curse of the realm.
I cannot remember that any of the ladies, proverbially famous for vanity, took exception to their Skolsky portraits. One, perhaps two, inordinately modest gentlemen did. Why, I can’t guess. He did them most merciful justice, and for his kindness was once imprisoned in a slowly descending elevator with a subject so indignant that Mr. Skolsky was momentarily expecting a shove to the bottom of the shaft. Broadway has its battlefields and its war crosses. Columnists must sign their ease and prepare to be first casualties.
But the larger, more constant embarrassment of this gallery of well-knowns must have been, not indignation, but, on the contrary, supplication. No sooner was Mr. Skolsky’s series a pronounced success—and it was such a success much sooner than it was a series—than the coy requests began to pour in. He was invited, advised, urged, begged to grow staccato concerning the semi-private lives of almost every semi-private person in New York.
He had me always wondering how he escaped wasting time and space on opaque and uninteresting third-raters. Until I saw that the fun lay all in Skolsky himself, and that he has his own happy way of turning kithen-maids into Columbines and dullest dogs into blue-ribbon wonders of the Broadway age.
GILBERT W. GABRIEL
*   *   *   *   *
A GIRL SCOUT 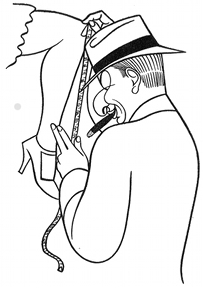 Florenz Ziegfeld. That’s his real name. His father was Dr. Florenz Ziegfeld, founder of the Chicago Musical College. His mother, Rosalie de Hez, a French girl. He was born in Chicago, March 21, 1869.
His telephone bill is $10 a day.
Likes to munch sweets. Generally carries a small box of candy in his pocket.
Can’t sleep after six in the morning. Starts his day’s work in bed. With a masseur working on him, he dictates telegrams. Only one-third of the telegrams he writes are actually sent.
Talks with a nasal tone. Which is mimicked by some of his stars behind his back.
Whenever he goes on a long trip he takes along his own chef and his own food in a special car.
His theatrical fame and fortune really started on July 8, 1907. It was then he produced his first Follies. It was presented in the theatre now known as Loew’s New York Roof.
Knows more ways of escaping process servers than any other man in the world.
He can’t keep a secret.
Wears lavender-colored shirts, pointed perforated shoes, usually brown, and a hat that costs $40. In the winter he always wears a heavy beaver coat. He hates evening clothes and seldom wears them.