Here are 10 things you should know about Fredric March, born 125 years ago today. March alternated between the Broadway stage and motion pictures throughout most of his 53-year career. 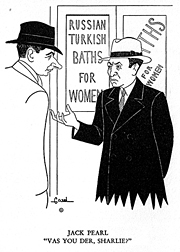 “Here’s the muff, George.”
He examined it carefully. He approved.
“I got it at a bargain, George.”
George immediately became suspicious.
“How much, Gracie? How much?” he pleaded.
“Well—er—two hundred and—er—fifty dollars.”
George felt around for support.
“Two hundred and fifty smackers for that thing? Gracie, you’ll ruin me!”
“But it’s a bargain, George, and the furrier let me have it at that price because there are two holes in it!”
And she held up the muff to show him the holes in which one is supposed to insert one’s hands. Burns was nonplused.
“But what about the gag?” he wanted to know. “Is the gag worth $250?”
“Why, George,” giggled the she-stooge, “I just did it. You see, I come on with this muff and you ask me how much I paid for it and I say: ‘I got it at a bargain because it had two holes in it.”
With which Mr. Burns fainted dead away. And that’s how jokes are born in case you’re interested.
END_OF_DOCUMENT_TOKEN_TO_BE_REPLACED