You know how, when you’re watching an old movie and there’s a scene in the interior of a car, and through the rear window, you can see rear-projected footage of the city streets the car is supposedly traveling on? If the movie you’re watching is set in NYC, there’s a chance that this is the footage you’re seeing.

This trip back in time begins at 60th Street and Fifth, just a block up from the Plaza Hotel, and continues north for 3.5 minutes or so, and then other angles are shot for the remaining time.

We’re not sure we’ve ever mentioned it here, but in addition to various other irons we have in the fire, we are also a licensed NYC tour guide. And this is our favorite time of year, because ’tis the season for our “New York at Christmas” Tour, a 90-minute walk during which we visit the sites and share the stories that have made New York the Christmas Capitol of America!

If you live in NYC or plan to be here during the holiday season (or if you know someone who does), this informative and entertaining holiday stroll just might be right up your alley.

We won’t bend your ear at length about it here, but if you’d like more info, just pay a visit to Avenues and Alleys. 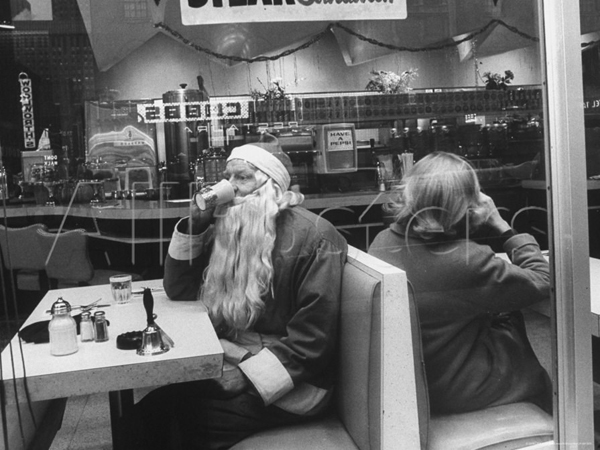 Filmmaker Travis Threlkel and photographer Louie Psihoyos tonight teamed to project digital light images of endangered species on the Empire State Building in what the New York Times called “an art event meant to draw attention to the creatures’ plight and possibly provide footage for a coming documentary.”

For their part, Threlkel and Psihoyos termed the event a “weapon of mass instruction.”

We were there to experience the show with a couple of pals, and as soon we arrived at the corner of 30th and Fifth, we turned to them and remarked, “What we’d like to see is a giant ape climbing that building.”

Not five seconds after that crack, the show began again (it was running on a loop every few minutes), and our wish was granted.

On a stroll up Fifth Avenue this morning, as the preparations were underway for today’s Veterans Day parade, we came across this beaut of a 1938 Packard. The kind gentleman who owns this beautiful car, a proud veteran of the Vietnam War, admired our vintage garb and insisted on taking a picture of us standing by his car.

After chatting a bit about the car (he’s had it 32 years and has done all the restoring of the car himself), we thanked him for his service and for sharing that lovely auto with us and continued on our way.

Here’s to all those who have served in our nation’s armed forces over the years; we truly appreciate your sacrifice and your service.

We’ve written before about the rare pleasures of a shoe shine, and having dropped off a book at the library (and paid our $1.75 fine for returning it a few days late) and scarfed down a veggie burrito, we were making our way back to the office during our lunch hour today when we spied a giant beach umbrella mounted upright in a stand right there on 19th street, near Fifth Avenue.

As we wandered by, we piped that it was a shoe shine stand. Immediately striking all other potential noon-time tasks off our mental to-do list, we planted ourselves in the empty chair and sat back while the amiable gentleman with the brushes in his hand did his thing.

We think our man might have been named Byron (we’re not certain of it, though). He was a pleasant chap who has, he said, been shining shoes for 39 years. He admired our ca. 1950s blue summer-weight suit and the straw fedora we wore with it.

“My father was a hat man,” he told us. “We lived in Harlem, and he used to work in the bar right next to the Apollo Theatre. He wore hats, mink, chinchilla.” We admitted that his father was a braver man than were we, that we couldn’t see ourselves sporting fur coats, but he went on to compliment our attire, insisting we was doing all right by ourselves.

Realizing we had just four dollars on us, we asked, before sitting down, what he charged for a shine.

“One dollar,” came the answer. A rare bargain, indeed, but we usually tip shine men extravagantly, given the low fees they usually garner, and even a 300% tip seemed miserly, given the low, low price he was charging.

So we admitted our relative lack of funds to him and asked if we might be able to both walk away feeling fairly treated if we were to hand him our four bucks at the end of his efforts.

“That’s just fine,” he assured us. “Two dollars would do it.”

“Not as far as we’re concerned, it wouldn’t,” we countered. “You’ll get all four of those dollars.”

He said that he’d been charging the same price since his earliest days shining shoes and had never seen the need to raise his price. “People appreciate the bargain,” he said, “and they take care of me.”

All in all, it was a delightful, day-(not to mention shoe-)brightening, encounter, as getting a shoe shine almost always is. If you’re in NYC as you read this, you’re encouraged to pay the gentleman a visit. He said he’d be at that spot—19th Street, just west of Fifth Avenue—for the foreseeable future, and we’re of the opinion that this kind of personal service—backed, as it is, by 39 years of experience, and at these prices—is well worth the trip from uptown or down.