Here are 10 things you should know about singer and actress Lillian Roth, born 111 years ago today. We’ve had a major crush on her since we first saw the 1974 reissue of the Marx Brothers‘ Animal Crackers; for our money, she had the cutest dimples in Hollywood history. 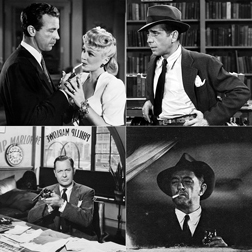 If you’re scratching your head at the question, stop right now and rush out to pick up The Big Sleep, the first in Raymond Chandler‘s series of novels detailing the adventures of his fictional private detective.

But if you’re already familiar with Marlowe, you can cast your vote for the best cinematic rendition of the character in the poll below.

This post was originally inspired by novelist and screenwriter Carol Wolper‘s take on why the ideal Marlowe has yet to be captured on film (her essay ran in the Los Angeles Times magazine in 2010, but is no longer available online).

“Many have tried to bring this character to the big and small screen, but success has been elusive,” Wolper, who in the essay made a dubious claim to be a Chandler purist, wrote. “Yet the desire for another shot never goes away. Marlowe is like that person you keep trying to break up with because you know it won’t work out, but you can’t get her (or him) out of your mind.

“Maybe a 2010 Marlowe isn’t Caucasian. Or if so, maybe he’s not a complete loner. Maybe he has a pal. Maybe that pal is even female. As blasphemous as that may sound to die-hard noirists, maybe we can worship at the altar of Chandler without being a slave to the past.”

It’s Mitchum by a mile, even though he was too old for the part by the time he did Farewell, My Lovely. It’s too bad Dick Richards and Eliot Kastner didn’t choose to film The Long Goodbye instead; Mitchum’s age wouldn’t have mattered as much, given the elegiac quality of that novel, and it might have erased the bitter and lingering aftertaste of the Altman/Gould travesty, a picture so ill-conceived as to boggle the mind. The ending, particularly, was as inappropriate and off-the-mark as the tacked-on moralistic finish to Kazan’s A Streetcar Named Desire.

If anyone doubts that Mitchum, in his prime, was the perfect Marlowe, just rent Out of the Past (1947), a classic noir in which he plays a very Marlowe-esque detective. Mitchum was thirty in 1947, a perfectly suitable age for the early Marlowe stories, and he exhibits all the qualities one could hope for in a movie Marlowe.

And we must strongly disagree with Carol Wolper that updating the character to the modern era is advisable or even acceptable (not to mention giving him a sidekick—sheesh!). There are plenty of modern-day characters yet to be adapted for the large and small screens. Leave Marlowe in Chandler’s vividly rendered past, or keep your hands off of him altogether. After all, Mad Men has shown us that a series must not have a contemporary setting to resonate with today’s viewers.

We wish Mitchum could have played Marlowe at a more appropriate age—he was a bit long in the tooth for the role in 1975—but he’s so right for Marlowe that he overcomes the age issue with ease. It’s Marlowe’s world-weariness that matters more than his age, and Mitchum had that in spades.

We rate Humphrey Bogart‘s Philip Marlowe in the original version of The Big Sleep, which was directed by Howard Hawks, second behind Mitchum, with Dick Powell, who broke out of his boy-singer rut in 1944’s Murder, My Sweet (the deep thinkers at RKO thought the title of Chandler’s second novel, Farewell, My Lovely, suggested a romance, not a hardboiled mystery—hence the title change) trailing closely behind in third.

So what do you say? Who’s your choice for the best cinematic embodiment of Chandler’s classic shamus? Cast your vote below.

Who was the best Philip Marlowe in the movies?
Created with Poll Maker