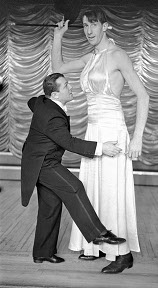 We enjoy browsing Flickr for intriguing collections of vintage photographs and were recently made aware of a particular group of images that particularly caught our fancy.

Dewey Barto and George Mann were a comedic dance who rose to popularity late in the 1920s, just as vaudeville was beginning to lose its primacy in the world of American show business. The humor in their act was based on the fact that Barto stood just 4’11” while Mann was a towering 6’6″.

You can just imagine the comedic possibilities.

A Flickr poster named Brad Smith has posted a series of 75 photographs, shot by Mann in the 1920s, ’30s, and ’40s, depicting vaudeville and movie theatre marquees at which the dancing duo appeared over the years, marquees that display the names of such all-but-forgotten vaudeville stars as Joe Frisco and Lou Holtz, any number of big bands and dance orchestras, and dozens of the more familiar actors and actresses who starred in the movies that vaudeville performers such as Barto and Mann were eventually reduced to supporting as “extra added attractions.”

The collection of Mann’s photos is a treasure trove for anyone interested in the era, and we’d happily share an example or three here to whet your appetite, but Mr. Smith has proclaimed such sharing absolutely taboo. There’s nothing that prevents us, technically, from grabbing a few of the photos and sharing them with you here, but we’ll play by the rules Mr. Smith has set up, even though we think them dubious.

Again, the photos were taken in the 1920s, ’30s, and ’40s by George Mann, not by Mr. Smith. It’s wonderful that they are in his possession, that they have been preserved, and that he shares them on his Flickr site, but what’s gained by restricting their limited dissemination by admiring viewers who wish only to direct kindred spirits to the collection we can’t begin to guess.

With that out of our system, we nevertheless encourage you to visit the site and enjoy the collection.