A clean, unchoppy print of Detour (1945), Edgar G. Ulmer‘s classic low-budget film noir, has been rarer than hen’s teeth for many years, so we were very pleased to learn that the film, a favorite of ours, has finally received a full 4K digital restoration (sure, sure, we’d rather it was a film restoration, too, but as the man said, beggars can’t be choosers).

Here’s the trailer. If you’ve seen Detour, it’ll leave you eager to see it again, looking better than it has in decades; if you’ve not seen it, it’ll give you a taste of what you’ve missed. We’ll be catching it at NYC’s Film Forum, where it opens on November 30; if you’re not within striking distance of the Big Apple, watch for it soon at a theatre near you (you might even want to lean on your local art/revival house into contacting Janus Films about booking this classic film).

Word has it, the restored Detour will also be released soon on DVD and BluRay, but take our word for it, you want to see it on the big screen if at all possible. 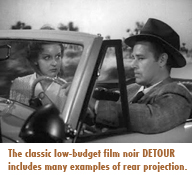