Here are 10 things you should know about Percy Helton, born 126 years ago today. The prolific character actor enjoyed a career that spanned 65 years. 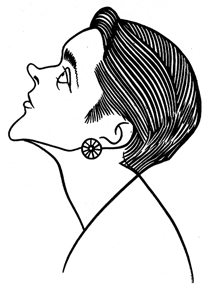 END_OF_DOCUMENT_TOKEN_TO_BE_REPLACED

In this chapter from his 1932 book, Times Square Tintypes, Broadway columnist Sidney Skolsky profiles a character he dubs The Broadwayite.

FOUR OUT OF FIVE

OUT of the mess of broken hearts, out of the string of speakeasies, out of the stage door, out of the glare of the White Lights, there has taken form a strange being. He is the soul of Broadway. He speaks its lingo. He symbolizes its credo. One little block, east or west of Broadway, and he is in another universe. Step up and shake hands with THE BROADWAYITE.

He considers it quite an honor if Madame Guinan bounces him over the head with a bottle.
After a two-minute acquaintanceship with anybody he calls the party by his first name.
His philosophy of life is merely a protective covering for his shortcomings. When he dies he still will be waiting for “the breaks.”
He reads Variety from cover to cover. Can tell you where they got that inside story. Also, if it’s true. Is certain his statement is the last word in the matter.
His manners are atrocious. He always keeps his hat on. Thinks it makes him look like a newspaper man.
He is a gag carrier.
Is a sidewalk critic. Stands on the curb during intermissions and gives lectures on the entertainment. Calls all the critics by their first names. He looks familiar to them.
When dining with anyone he orders filet mignon. And can outfumble anyone for the check. When eating alone he orders beans.
Remembers George White when he was only a hoofer. Recalls vividly how George followed his advice. Knows who really picks the girls for Ziegfeld. He informs everyone that Lillian Gish and George Jean Nathan really hold hands.
He talks loudly. Even when he whispers.
He has a repertoire of stories. Uses them again and again. Even employing the same gestures. He gets to be quite boring.
He is unfeeling. His proudest moment was when a chorine jumped from the ninth floor of a hotel because he jilted her. The newspapers spoiled it all by saying she fell.
Looks for his name in Ward Morehouse‘s recording of the celebrities present. Believes the list to be incomplete if his name is not included.
He thinks that dramatic criticism in this man’s town is a matter of personal prejudice and that the Paramount Building is actually at the “crossroads of the world.”
Had a sandwich named after him in a well-known delicatessen.
If given his choice to be anyone in all history he would select himself.
He has never been in the Metropolitan Opera House. Tried to crash it once. It was the Lambs’ Gambol. He couldn’t get by a ticket taker. He went in like a Lamb and came out like a lion.
Nothing has ever been known to embarrass him.
Will often reprimand a waiter in this manner: “How about a little service? Do you know who I am? I’m practically God.”
Let him cough once. Then he believes that the night life has got him at last. That he has tuberculosis. A lozenge clears the throat and he is off again.
His ambition in life is to have his nameplate on a seat in the Chanin theaters.
He has written for almost every magazine in America. Has the rejection slips to prove it.
His favorite expression is “I told you so.”
He is greatly admired by folks who don’t know him.
It is utterly impossible for him to keep a secret.

END_OF_DOCUMENT_TOKEN_TO_BE_REPLACED

In this chapter from Times Square Tintypes, Broadway columnist Sidney Skolsky profiles David Belasco, an eccentric producer who towered over Broadway in the early part of the twentieth century. 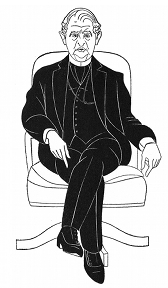 Claims he feels as spry today as he did at the age of twenty-one. If you doubt it, he’ll race up and down the corridor to prove it to you. His one great wish is to die in harness.
He is five foot three. His shoulders droop inward. His eyesight is good, but he rambles a bit when talking. In conversation each succeeding word grows fainter and the last half of his sentences is inddistinguishable. Yet the listener understands every word by watching his hands and eyes.
It is his custom to open all his plays on a Tuesday night.
When he is greatly pleased with someone, he quickly digs into his pocket and rewards the party with a nickel or a dime.
Has been at different times in his career a messenger boy, a chore boy in a cigar factory, a clerk in a bookstore, a free-lance reporter, a bareback rider in a circus, a declaimer and a necktie saleman. Somewhere among these various occupations he managed to write his first play. He was only twelve at the time and the opus was called Jim Black or The Regulator’s Revenge.
The now famous clerical collar can be traced back to his youth, when his idol was Father McGuire. It was hero worship that first led him to imitate the Father in the manner of dress. Later he probably realized that a saint in the theatrical profession would be a novelty.
His collars and ties are made especially for him. Generally wears blue shirts. His shoes are long, pointed, black and buttoned. His hat, a square derby, is also made to order.
He once played Uncle Tom in Uncle Tom’s Cabin.
Never smokes and seldom drinks. Three sips are enough to make him feel gay.
Actors will work for him cheaper than for any other producer, because they believe he will bring out their hidden talent. He so impressed his feminine office help that they work for him for twenty-five dollars a week in preference to working elsewhere for fifty dollars weekly. At the office they call him “The Governor.” He refers to himself as “D. B.” His mother’s pet name for him was “Wandering Feet.”
One of his most famous statements is: “Introduce me to a girl and I’m positively bashful. Bring me an actress and I’m her master.”
Blanche Bates laid the cornerstone for the present Belasco Theatre, December 15, 1906. It was first called the Stuyvesant Theatre. He renamed it because he wanted a monument.
He enters his office from the stage door. Ascends to it by means of a private elevator. The office is a studio room on the third floor of the Belasco Theatre. There is another entrance on the third floor—an unnoticed door protected by a burglar alarm. Entering this door, you walk through a room filled entirely with glassware. Then comes the Napoleonic Room. Then the Gothic Room. Then a library. Then an indoor garden with a spraying fountain. And then the office proper. His desk is merely a table given to him thirty-three years ago by his mother. It is held together by strings. He also has a sunken Roman bath in the building and spends a great deal of time in it every day.
He is a firm believer in the supernatural. The idea for The Return of Peter Grimm, so he states, was given to him in a dream by his mother after her death.
Lives in a hotel in the East Fifties. His home is similar to his office and contains many curios. In one of the clothes closets he has built a miniature cathedral. Many antique clocks decorate the living room. No two of them telling the same time.
He has produced more plays than any other person in the world. Not counting his amateur productions, the figure is three hundred seventy-two. Has never had a penny of outside money in any of his shows. The investment is his own, as are the profits and losses.
Is much interested in electrical effects. In one play, The Darling of the Gods, a lighting effect alone occupied the stage for seven minutes. One of his most important contributions to the theater is the hidden footlights.
His favorite color is baby blue. He hates shiny objects. He never has his shoes shined.