Connie Bennett Archives ⋆ Cladrite Radio
Skip to content
The fifteenth chapter from Hollywood Undressed, a 1931 memoir attributed to the assistant of masseuse and health guru Sylvia Ulback, a.k.a. Sylvia of Hollywood (but actually ghost-written for Sylvia by newspaper reporter and screenwriter James Whittaker), tells how actress Grace Moore tried to steal Sylvia away from Gloria Swanson.

THE MOORE, THE MERRIER! 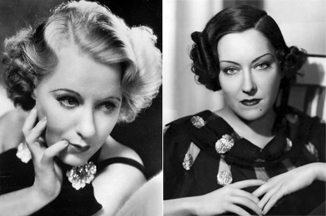 IN ALL Sylvia’s experience, Grace Moore is the only client who has ever managed to undress in a massage parlor without shedding her dignity. The general atmosphere of Sylvia’s bungalow being what it was, and the quarters being cramped, our paying guests were usually about as mannerly as dogs in a pound. During business hours, the premises usually looked like the bank of the ol’ swimmin’ hole on a hot Saturday afternoon. People’s clothes dropped wherever they stepped out of them, and every so often Sylvia was asked to start a movement whereby everybody traded shirts and stockings until all had their own back again.
But Moore carried her manners with her, as she did everything else expect a grand piano—and she would have had the piano brought along if she’d thought of it. The two handmaidens screened Grace into a corner of our two-by-four dressing room and put her through an act like a queen getting ready for bed.
Well, you can put on all the front in the world, but sooner or later you’ve got to turn around. Five minutes later Sylvia was looking Grace anywhere but in the eye and asking her if opera singers sit a lot between shows.
Grace took it high and mighty at first.
“You must be mistaken,” she came back, as loftily as she could. “That sort of thing would show up in a camera test, wouldn’t it?”
“You bet it does,” assured Sylvia.
“Well, my tests at M.-G.-M. were pronounced perfect,” asserted Grace. “And I did one whole scene in profile.”
Sylvia didn’t argue. But what Grace had said didn’t jibe with the confidential call Sylvia had had from the M.-G.-M. lot that morning—an appeal from headquarters to do something about—quarters elsewhere.
Sylvia didn’t say anything, but maybe she looked a lot. Anyway, the prima donna went away from the first treatment in a mood of silence that tipped Sylvia off that she might as well expect trouble.
When the trouble came—a “misunderstanding”—the boss made short work of it, and then called M.-G.-M. to cancel dates for their singing star’s further treatments.
And when Grace herself got on the phone a little while later, and apologized for the misunderstanding and said everything was lovely, Sylvia froze up like a fjord. Grace’s olive branch took the form of an invite to attend a Sunday party up in her hilltop house, and she promised Sylvia some fun.
“I’m going to have M.-G.-M. send over the trade-mark lion, and Bee Lillie will be there—” she ballyhooed.
“And I’m supposed to be part of the menagerie?” shouted Sylvia, and hung up the receiver.
But after a while the boss remembered that dough is dough, and the Moore the merrier. Grace came back into the fold. But she continued to act cool and distant. Except, of course, when the boss was beating her lobster red; everybody is near and hot then.
Grace was getting hot in more places than Sylvia was responsible for. The reason for a steadily mounting temperature in her case was that Gene Markey, whom she had lured away from Gloria Swanson, was showing signs of a relapse.