Charles Ray was a popular juvenile star in the 1910s and ’20s, but by the ’30s, his career was on the rocks, and he turned to writing. Here’s another in a series of offerings from his book, Hollywood Shorts, a collection of short stories set in Tinseltown.
*    *    *
Chickens
Bill Noel was a great animal trainer. He admitted it himself. Circus people lifted their eyebrows and mumbled, “Poor Bill!” when they heard he was enamored with chickens.
“And what an act I’ve got! The greatest in vaudeville. Wait until you catch it.”
Bill was trying his persuasive powers upon an indifferent booking agent, and talking rapidly to keep from hearing any disheartening reply.
“Maybe so,” the agent grumbled.
“But listen, I’ve trained these chickens for months,” Bill hurried on. “Of course, I clown about on the 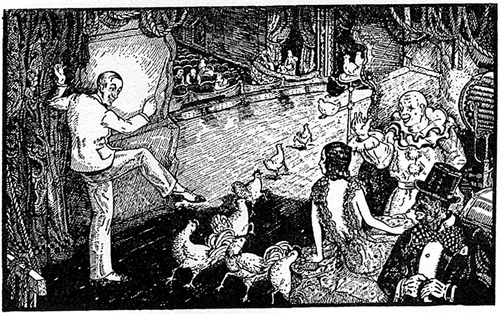 stage to get additional laughs. The act wouldn’t be nothin’ without the by-play I give it, but the chickens make it all novel. See? Nothin’ ever been like it!”
Wearily his agent grunted, “I’ll see what I can do for you, Bill,” and made a note on his desk pad.
“And the billing!” the hopeful one insisted. “You know, Noel and Chickens would make the audience think of dames. Imagine the laugh on the opening, when poultry struts on to music, an’ I clown on after ’em. Swell? It makes the act start with a wow. Oak?”
A conversational pause made Bill laugh to help things along. Boredly the agent blew smoke tendrils toward the ceiling.
“Okay, Bill,” he agreed after an impressive pause. “I’ll arrange a try-out somewhere upstate, and we’ll see what bookings we can grab.’
“Get bookings toward Hollywood,” Bill urged, “’cause I’m tellin’ you one thing: those chickens of mine will make any picture they appear in.”
The try-out date was set and the act reviewed. Bill got the coveted bookings, and not toward Hollywood. Weeks later, from Owosso, Michigan, he telegraphed a hopeful message to his agent:
Receiving no answer, Bill swallowed his pride and played every vaudeville date in the northern time, began on the southern time, then cleaned up the central time. But he got no nearer the film city than the huge buses marked Los Angeles which he continually saw from the train windows.