But we never knew what inspired the change. Was Glen Grey brought in to replace a former leader of the band, a baton waver who preferred not to be cited by name?

Well, as we learn from this week’s Snapshot in Prose, a 1934 profile of the band, the answer to that question is: no.

Actually, violinist Hank Biagini fronted the band onstage for the first few years of its existence, and for a while, the baton was handed off to violinist Mel Jenssen.

Finally, in 1937, Gray was convinced to lead the band, and he would eventually come to control the very name “Casa Loma Orchestra.”

The Casa Loma Orchestra, which was formed in 1927, lasted till 1963 (quite a run for a dance band), though they stopped touring in 1950, limiting themselves to recordings only, and from the late ’30s on, Gray’s name was included in the band’s name.

But in the early days of the group, before he became the orchestra’s leader and conductor, Gray was voted the band’s president. A swinging dance orchestra that had a president (and a vice president and a secretary)? That’s right, and if you’ll read on, you’ll learn how that came about.

And if you read all the way to the end, you’ll have the chance to give a listen to a couple of our favorite Casa Loma recordings. 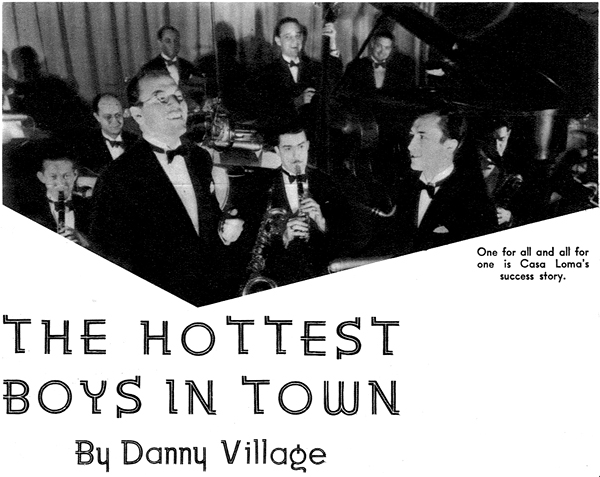 HE hottest boys in town are members of that rootin’, tootin’ outfit of blue-blowers called the Casa Loma orchestra. How they got their start made band history.
Back in the pre-Depression era, the people of Toronto, Canada had been looking forward for months to the visit of the king and queen of England. They had built a fine palace for them and called it Casa Loma.
But King George and Queen Mary changed their minds. What was then to be done with Casa Loma—the palace. It was too big for a private house. It was too expensive for a club. The State had no use for it. Finally, it was decided that Casa Loma should become an exclusive hotel.
A bunch of boys who had organized in Detroit in 1928 as the Orange Blossom band was brought to Casa Loma to lure customers. The band succeeded, but the hotel failed. So the Orange Blossom boys started on a tour under the name of the Casa Loma Orchestra.
The tour flopped. In 1929, they hit New York, broke and discourage. And then the Big Idea was born.
The Big Idea makes the Casa Loma different from any other band in America. It makes it a business corporation with a president, vice-president, and secretary. It makes each bandman his own boss and each sharing the profits.
Back in 1929, with nothing to lose and everything to gain, they elected Glen Gray (whose last name, Knoblauch, he wisely dropped) to their presidency. Pat Davis became secretary-treasurer. Francis O’Keefe was vice-president. Each man received an equal share of stock.
Their first important problem was what to do with ten bosses. Well, certain powers were invested in each officer. They created a Board of Directors, hired a man as purchasing agent. For their programs, they created a program committee, each member serving a one-month term.
And they drew up a list of rules and regulations. Drastic rules, believe me. For instance: To bend the elbow over an alcoholic beverage while on the job costs the elbow bender a fine of $50.00. To miss rehearsal without leave draws a fine of $25.00. Being late on the job costs another $25.00.