THE LIFE OF THE PARTY

Earl CARROLL. He has a throne, a palace and a title. His throne is an antique Chinese chair. His palace is the theater bearing his name. His title is “The Earl of Seventh Avenue.” 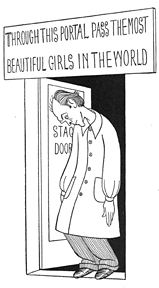 He is extremely polite to everyone. Expects people to be that way to him. Nobody can really get close to him.
He suffers from insomnia.
Was born in Pittsburgh, September 16, 1892. Has two brothers, Norman and James, and one sister, Alice. The brothers don’t look like him or each other. The sister could pass for his twin. When a small boy he was dressed in a white sailor suit.
If he sees a pretty girl on the street he will stop her and ask her if she wants to go on the stage.
At the age of sixteen he stood in the center of Nanking Road, China, with only forty-five cents in his pocket.
His office is backstage of his theater. A rug, the color of pigeon blood, covers the floor. His desk is enclosed in a wall. The pressing of a button shoots it forward. He uses a sword for a paperweight. Has a statue of Buddha here. And a refrigerator with Chinese letters written on it. The letters spell—happiness. In the rear of the office there is a secret panel through which he can make a hasty exit.
He can’t wear a shirt with a collar attached. And all of his vests must be double-breasted.
Once wrote a song with Enrico Caruso. It was “Dreams of Long Ago.” Immediately after joining the army he wrote a song called: “When I’m Through with the Arms of the Army I’ll Come Back to the Arms of You.”
Always throws a party for himself on his birthday.
His favorite type of beauty for the stage is a tall blonde. His own personal taste, however, runs to slender brunettes.
During the war he was a lieutenant in the United States Air Service. He was the first man to land an airplane in Central Park.
While rehearsing a new show he wears a sand-colored smock. His shirt is minus collar and tie. He stands in the orchestra. Has a telephone operator’s apparatus on his head. Through this he gives instructions backstage, under the stage and in the electrician’s booth plastered on the back wall of the balcony. To his left is a small table. His secretary, Miss Ruth, sits here and takes memos. During all this he is continually drinking Poland mineral water and chewing gum.
Likes to use perfume. His two favorites are Caron’s Acaciosa and Gabilla’s Jasmin. He sprays his throat with perfume daily.
On April 10, he and his two brothers and sister always journey to Pittsburgh to visit their mother’s grave. On Mother’s Day he sends flowers.
Was the first man in New York to own a “Starlight Bungalow,” now known as a penthouse. His was located on the roof of 729 Seventh Avenue. He called it “Top o’ the World.” He likes to live high and now resides on the top floor of a tall apartment hotel.