Here are 10 things you should know about Robert Ryan, born 110 years ago today. He occasionally expressed discomfort at being asked to play so many bad guys in pictures. 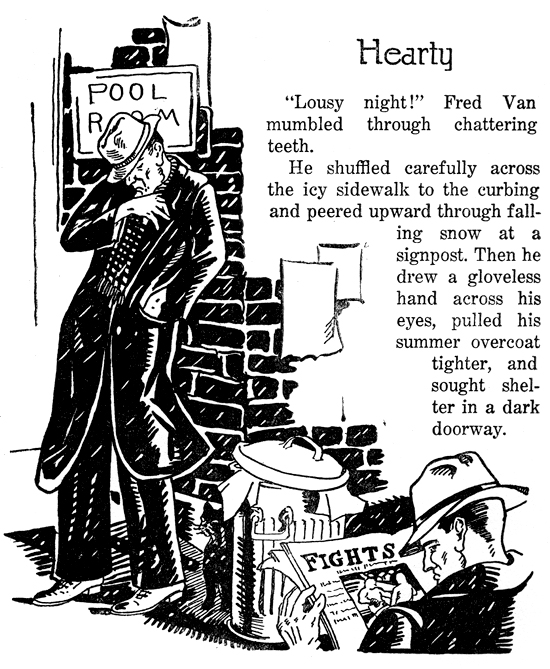 “Fool!” he groaned again and again.
His lips twitched with the cold, and he beat his shoes against the brick wall to rid them of icicles, giving himself hell for buying a pack of cigarettes when it was really a bowl of soup that he needed.
Nothing short of foolhardy, he reasoned disgustedly. He should have held out at least supper money from his wager. A dollar couldn’t have made much difference in his winnings, if the Kid did win. When the Kid won, his mind corrected quickly.
Self-censure was helping to consume his strength.
He was forty-four, and should have better sense. This eastern dampness was playing havoc with his lungs. Clear out, that’s what he’d do. Right after the fight. He’d force the Kid to go to Hollywood, make a few pictures, and forget the fight game entirely.
Two men bumped each other on the slippery sidewalk.
“Goin’ soft?” the fat individual kidded. “What you doin’ with an umbrella, Bert? So you can’t take it?”
His friend laughed. “Can’t take it? That’s how I got it! You look hearty enough, George,” he complimented and disappeared in the night.
“Hearty!” Fred Van grunted.
That’s what he desired most. Then to block out unhealthy thoughts, he took inventory.
He had trained Kid Royal right up to the moment, gave him last-minute instructions, and put hom on the train for Newark. He couldn’t stand seeing the Kid fight from the ringside. Besides, his presence might make the Kid nervous. There was too much at stake. He wanted to listen to the fight over the radio, when he got nerve enough to enter the poolroom again.
Quick speculating why it was that he could not bring himself to act just as he used to do, when he had plenty of jack, he was answered as rapidly. His appearance reflected nil in the mirror of men’s eyes. The poolroom manager might class him as a bum if he was seen hanging around that radiator, and might demand his exit. Too near being the truth.
And so his mind argued on until aching toes made a decision for him.
Moving along the edge of the building carefully, he wiped his coat sleeve across the frosted glass window and peered into the poolroom. Through the steamy surface, he saw that the place was filling up. Fourteen minutes to eight, said the wall clock.
His aching body informed him that he would have to chance results.
Act natural, that’s what he’d do. Just as he used to do when searching for a favorite billiard partner. Then he’d casually ease over by the radiator.
With a firm decision, he descended three steps and flung the door open with the air of a millionaire. But his attitude was ephemeral. A terrific north wind blew the door from his grasp, and it rebounded instantly, striking him a severe blow. His icy heels flew from under him, and the next moment he was sprawled on the floor under a pool table.