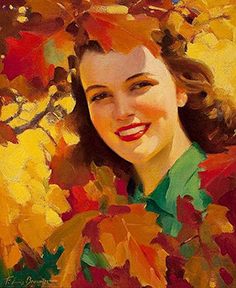 Fall is just around the corner, but at Cladrite Radio, we just couldn’t wait: We’ve added our vast collection of autumnal songs of the 1920s, ’30s and ’40s to our playlist, including more versions of the delightful Shine on, Harvest Moon than you may have known existed.

If you’re ready for sweater weather, pumpkins, falling leaves and the hint of woodsmoke in the air, you’re definitely a kindred spirit, so tune in now via the link at the top of this page!

And be sure to check out our Patreon page, where you can show your support and help us keep our toe-tapping tunes alive and streaming for as little as $1 a month!

So pleased were we, one day last week, to be stepping out into the first cool, crisp fall morning of the year that, feeling dapper in some of our favorite seasonal attire, we decided to stop off at our neighborhood florist to obtain a flower for our lapel.

“What kind of flower would you like?” the amiable gentleman behind the counter asked.

“Oh, something autumnal,” we replied. “We’re celebrating the cool weather.”

Whereupon he pinned this lovely flower to our sports jacket and refused to take a dime in payment.

We love autumn more than any other season, and it’s not even close. We love it so much that we wrote an essay about it a while back that we hope you’ll find amusing (you may even have heard us present it on NPR’s All Things Considered some years ago):

See You in September

Another Labor Day has come and gone, and once again, I spent the last week of summer gritting my teeth as op-ed columnists and on-air commentators bemoan the passing of another summer. At times like this I feel like a Unitarian enduring a fire-and-brimstone fundamentalist sermon: Though I may concur with certain of the preacher’s points, I can’t help but feel that he’s overstating his case.

For, unless you’re at the beach or poolside—and let’s face it, at any given time, what percentage of us are?—summer is surely the most overrated annual event this side of New Year’s Eve. The joys of the season are largely mythical. For many the word “summer” conjures images of sun, sand, and surf, of long, lazy days spent idling in a hammock, of cookouts, pool parties, and miniature golf. All of which admittedly sounds delightful, but whose docket is so clear? Unless you’re under the age of 16 or make your living as a teacher, your boss, like mine, probably expects you at the office 8 hours a day, five days a week—even in June, July, and August—and would consider “But—it’s summer!” an unacceptable explanation of a prolonged absence.

No, that vision of summer is largely a pipe dream but I’m happy to remind you of some of the season’s attributes that are not: searingly hot vinyl carseats, clothes that stick to one’s damp skin, and yard work. This last is reason enough to resent the onset of summer, and is perhaps the primary motivation for my immigration, all those years ago, from the suburbs of Oklahoma City to the island of Manhattan. Not that this concrete jungle is any kind of summer paradise: It’s hot, hazy, and humid. But at least it doesn’t need mowing.

But in autumn! Ah, autumn is a grand time in Gotham: The city is imbued with the sort of glow usually seen only in the work of a master cinematographer. The haze dissipates, there’s a nip in the air, and the island’s energy, once sapped by the summer heat, returns with a flourish, like a leggy supermodel just back from the Hamptons.

It’s been suggested to me on more than one occasion—and by members of more than one gender—that summer’s tribulations are worth enduring if only for the expanses of skin that are bared for our pleasure: Even this, I submit, is a mixed blessing, at best. Let’s face it, it’s a relatively rare human being who possesses a midriff or a set of gams worthy of display. Most of us look far better in a sweater and slacks than we ever would in a cut-off T-shirt and bikini briefs. The good Lord has blessed us each with a perfectly good imagination: Pray let us give each other occasion to exercise it.

Perhaps the biggest trial summer presents us is olfactory in nature. Yes, there are pleasant smells associated with the season: the sweet scent of a perfectly ripe peach, the alluring aroma of steaks on the grill, the wafting delights of honeysuckle in the air. But summer is decidedly unkind to many of nature’s creatures. Late some August afternoon, stand close and take a good of whiff of your dog, your eight-year-old, or your next-door neighbor. Chances are, all three are in dire need of a good scrubbing and none is likely to undertake it on his own.

So decry the passing of summer if you must, but be aware that the sentiment is not unversal, that there are others like me whose hearts are set aloft by the delights of autumn—by shopping for new school clothes, sampling the season’s first pumpkin pie, or indulging in a long stroll on a chill night with just a hint of woodsmoke in the air. And we fall-o-philes will no longer remain silent. We will loudly celebrate our seasonal preferences with energy, enthusiasm, and pride—autumnal pride!

We know it’s not quite autumn yet—not according to the calendar, anyway—but just as Labor Day is by viewed by so many summer lovers as the unofficial end of their favorite season, for us fall-o-philes, it’s the unofficial beginning of autumn. So we’re celebrating by adding a slew of autumn-themed tunes to the Cladrite Radio playlist. Keep listening—you’ll notice them over the coming days and weeks.

And just to whet your appetite, we’ve included two of our favorites below, along with some delightful lyrics that capture our mood.

Kay Kyser and His Orchestra — “Shine on, Harvest Moon”

‘Tis Autumn
Old Father Time checked, so there’d be no doubt.
Called on the North wind to come on out,
Then cupped his hands so proudly to shout,
“La-di-dah di-dah-di-dum, ’tis autumn!”

Then the birds got together
To chirp about the weather.
La-dah-di la-dah-di la-dah-dum
After makin’ their decision,
In birdie-like precision,
Turned about, and
Made a beeline to the south.

My holding you close really is no crime.
Ask the birds and the trees and old Father Time.
It’s just to help the mercury climb.
La-di-dah di-dah-di-dum, ’tis autumn.