Rudy Vallée was born Hubert Prior Vallée 115 years ago today in Island Pond, Vermont. He was a huge star as a young man, a true teen idol singing in a brand new style—the Elvis Presley (or perhaps the Justin Bieber) of his day, if you will. Here are 10 RV Did-You-Knows:

Happy birthday, Rudy Vallée, wherever you may be! 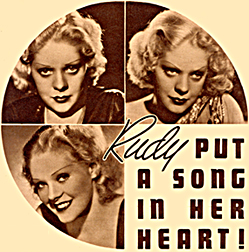 That, my lads and lassies, is an excellent description of the Alice-that-was just a few years ago, an Alice that was coy and sweet, who had medium brown hair that coiled up the back of her neck, who never rouged unless unless she had to and who was afraid of her own shadow.
What transformed the demure little lass with the cast-down eyes into the “hot” blondlined torch singer of the arched eyebrows and the come-hither gaze in her orbs?
It was while the Scandals of 1932 were playing in New York city that Alice Faye met Rudy Vallee. Not really “met” him, mind you, but came face to face with him. For Rudy in 1932 was already sitting on his throne and Alice was just another chorus girl who had yearnings to be something better someday.
Here is Rudy Vallee, a top-notcher on the stage, whispering musical nothings into the shell like ear of Ethel Merman, his co-star. Watching them, her eyes glued on the pair, is a little obscure dancer named Alice Faye whose soul burns and seethes with ambition to rise to stellar heights.
And Rudy probably never knows of her existence, never knows that soon she will be the leading singer in his band, and some say of his heart as well.
It is a long cry now from Alice the chorus girl. Her childhood days spent somewhere in New York city, where she was born, foresaw nothing of the girl who would some day become a dancer in a night club or a red-hot singer of the blues.
Alice worked hard at the Chester Hale Ballet School which she entered right after her graduation from high school. She was the most conscientious pupil they had. She came for her lessons and left when they were over.
From Chester Hale’s, she graduated into a job at the Palais Royal. Theer again it was all work, no play with her. Other girls may have hung around after closing hours, may have flirted and dated with some of the customers, but not Alice Faye. Her thoughts were on a dancing career.
END_OF_DOCUMENT_TOKEN_TO_BE_REPLACED