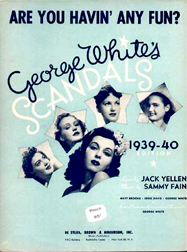 Bless Royal Caribbean’s little corporate hearts. They seem to have a Cladrite kindred spirit or two involved in creating their advertising campaigns. We wonder if the people responsible know about our humble little operation—here’s hoping.

Many of you will recall that in February, RC ran a campaign that featured the Hal Kemp Orchestra‘s rendition of “It’s Winter Again,” a relatively obscure song from 1932 with lyrics by Arthur Freed and a lovely melody by Al Hoffman and Al Goodhart.

We were already featuring the lyrics to the song at the bottom of each page here at Cladrite Radio, and when the commercial featuring the Kemp recording of it, with Skinnay Ennis on vocals, began to run frequently, our traffic shot right up. Folks were Googling the lyrics trying to find out more about the song and/or the recording and were finding their way here (more on that here).

Which suited us just fine, as you might imagine.

February came and went, as did winter and, therefore, that particular commercial, but the good folks at Royal Caribbean are now running a television spot that features another relatively obscure song from the Cladrite era, “Are You Havin’ Any Fun?“. We thought the spot might be using a 1941 recording by Joe Loss and His Orchestra, but we began to suspect that it was, in fact, a modern-day recording, just made to sound old (which this story about the commercial confirmed.)

So we thought we’d share the lyrics and a couple of recordings of the song with our readers and listeners. When you’ve got a sympatico relatiionship with a company like Royal Caribbean, you might as well prolong it.

Are You Havin’ Any Fun?
Hey fellow with a million smackers
And nervous indigestion
Rich fellow, eats milk and crackers,
I’ll ask you one question,
You silly so and so,
With all your dough…

Are you havin’ any laughs?
Are you getting any lovin’?
If other people do,
So can you, have a little fun.

After the honey’s in the cone,
Little bees go out and play.
Even the old grey mare down home
Has got to have hay. Hey!

Why do you work and slave and save?
Life is full of ifs and buts.
You know the squirrels save and save,
And what have they got? Nuts!

“Are You Havin’ Any Fun?” was composed by Sammy Fain (music) and Jack Yellen (lyrics) for a Broadway show called “George White’s Scandals of 1939.” The Scandals were an Ziegfeld Follies-esque revue that was produced on an annual basis from 1919-1939.

Tony Bennett had a hit with the song in the late 1950s, but the version heard on the Royal Caribbean ad has more of a late ’30s/early ’40s feel to it, and the versions we’re sharing below date from that era.

“Are You Havin’ Any Fun?” — Tommy Dorsey and His Orchestra

“Are You Havin’ Any Fun?” — The Hoosier Hot Shots 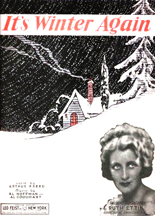