Here are 10 things you should know about Mayo Methot, born 117 years ago today. Though she enjoyed some success, her Hollywood story proved to be a sad one.

Here are 10 things you should know about Zeppo Marx, born 120 years ago today. Though his contributions to the Marx Brothers’ success are often dismissed, devoted fans recognize that the team was somehow better with him than without.

Adolphe Menjou was born on February 18, 1890. A true clothes horse, he virtually cornered the market on playing suave scoundrels over the course of his nearly 50-year career.

Here are 10 things you should know about Adolphe Menjou…

The suave and debonair Adolphe Menjou was born 125 years ago today. We encourage you to hoist a well-made cocktail in an elegant glass in his honor today. 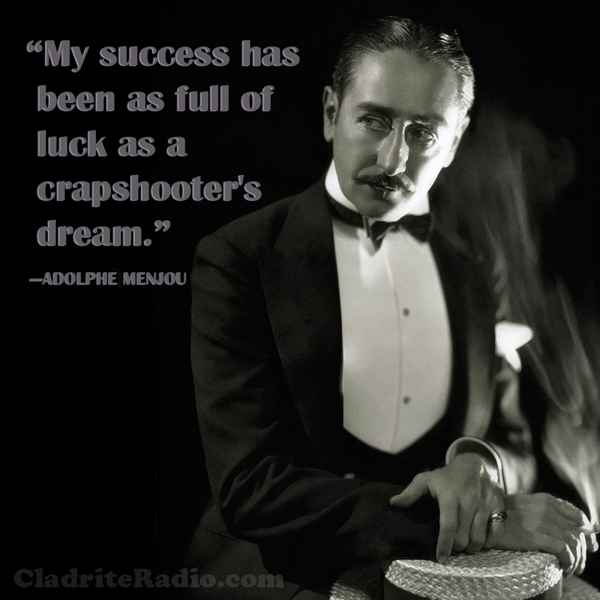 We don’t often repeat posts, but on this date every year, we make an exception:

It was 81 years ago tonight that the world’s first drive-in theatre opened in Camden, N.J. It was the brainchild of one Richard M. Hollingshead, Jr. The first movie shown at the first drive-in? Wives Beware, starring Adolphe Menjou (Wives Beware was originally released some months before under the title Two White Arms).

If you’re within an hour’s drive of an ozoner, you owe it to yourself to pack up the kids and take in a movie under the stars tonight. Not sure if there’s a drive-in near you? Drive-ins.com is the place to find out.

And just to whet your appetite, we’ll share these drive-in intermission clips with you, plus a television advertisement for a now-much-coveted Remco miniature drive-in toy from the 1950s (watch for a familiar face in the commercial).