Some months ago, underemployed and frustrated at not landing any of the office jobs we’d pursued, we took the NYC Department of Consumer Affairs tour guide licensing exam. 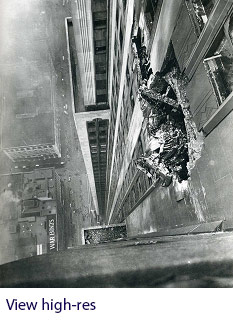 We hadn’t studied at all—a friend who’d worked in the industry thought we could pass it without too much trouble, and bless his heart, he was right.

But we found it almost as hard to find tour guide work as jobs in our own field—we got hired at one point, but a scheduling issue (and a bonkers, ill-tempered supervisor) caused that offer to go up in flames.

Not before we spent more than twenty hours taking copious notes as we rode the company’s hop-on, hop-off double-decker tour buses during the dog days of late July and August, preparing ourselves for the shifts we thought we were about to come our way.

One story we were intent upon sharing with the tourists who would have boarded our bus, had things come together, was the day in 1945—July 28, it was—when a B-52 aircraft crashed smack dab into the Empire State Building, then the tallest structure in the world.

It’s a remarkable event to consider, really—especially from our current vantage point, given the events of September 11, 2001.

The bomber, piloted by Lieutenant Colonel William Franklin, Jr., collided with the north face of the skyscraper between the 79th and 80th floors. Fortunately, it was on a Saturday, so the building was relatively empty. Still, 14 people died (including Lt. Col. Franklin and his crew). The fire was put out in 40 minutes, and the building was open and operating again (though some floors were closed, natch) just two days later.

One engine detached from the plane upon impact, traveling through the building and coming out the other side before finally landing on the roof of a building on the next block. The other engine fell down an elevator shaft.

Speaking of falling down an elevator shaft, July 28 proved to be an especially eventful day for one Betty Lou Oliver, a building employee. She was working that Saturday as an attendant on the 80th floor and when the plane struck, she was thrown off her feet and burned badly.

Trauma enough for the most stalwart among us, but it got worse for Betty Lou. Rescue workers got to her and were lowering her to the ground floor in an elevator, but they were unaware that the cables had been weakened due to the crash. The cables snapped and Oliver plunged 75 floors to the basement of the building.

Oliver naturally suffered serious injuries, but she survived and eventually returned to ride the elevator again. One simply must get back on the horse when thrown, we suppose.

We’d never before seen a picture of the Empire State Building after the crash, and were intrigued to come across the one above, which was taken by photographer Ernie Sisto from the 90th floor. It’s said he asked two other newsmen to hang onto his legs as he dangled out the window to get the shot.

We also found the following newsreel footage of interest, and thought you might, too.