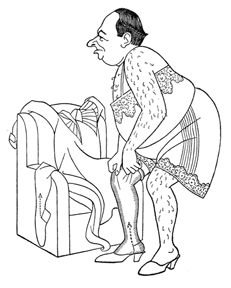 He talks with authority on any subject.
His first name is Eugene. But he doesn’t use it because he is a believer in numerology.
Started his theatrical career by carrying copy for the critics. In those yesteryears the critics wrote their reviews in the theater. He called for their copy, delivering it to their respective papers. He received twenty-five cents from each critic. He looked mighty cute riding about town on a bicycle.
Is happily married to a most charming lady.
He types with two fingers. And generally stubs them.
He is the best broadcasting station side of the Rocky Mountains.
He lives at the Hotel Chelsea but gets his mail at the Hermitage Hotel.
Writes his reviews on the second floor of the Fitzgerald Building. It takes him an hour and half to do so. Then takes the review home, places it under his pillow and sleeps on it. A messenger calls for his copy every morning at nine.
He suffers from new diseases only.
Has attended more than 5,000 first nights.
Knows more about Broadway than any man in the Garment Center than any man on Broadway.
His father was a school teacher. Had a degree in philology. Spoke nine languages.
He knows every restaurant in town that serves an eighty-cent table d’hôte dinner. Also knows their daily specials without looking at the menu.
Has a repertoire of stories. Tells them again and again. Employing the same gestures.
He’s the best audience he’s ever had.
Visited Europe last summer and was received by the Pope. His trip was ruined, however, on hearing that a producer had withdrawn his advertisement from Women’s Wear.
He notices legs but can’t carry a tune.
Carries a folding wallet which when spread out would cover the dance floor of a night club. It contains passes for everything in town, from the Aquarium to the Metropolitan Opera House. Also carries various patent medicines with him. No matter what ails you he’s got something that will cure you.
Tells things in detail. Then says: “Now what I mean to say is this—” And he starts all over again.
Smokes cigars and only offers them to people who don’t smoke.
Actually placed himself on every opening-night list. He published a sheet listing all the critics. Mailed it to the press agents for their convenience. He placed his name on the list. Before long he was complaining about the location of his seats.
He perspires freely about the neck. When attending a banquet (his favorite indoor and outdoor sport) he always career an extra collar with him.
Calls people by their wrong names. When corrected says: “I know it’s his wrong name, but I call him that.”
In Sardi’s he once made a flip crack about an Italian who had a mustache which extended fully six inches on both sides. The playboys of the Rialto got busy. They told Kelcey the man had overheard him and threatened him. For two days he stayed away—frightened. On his return he immediately sought out the man with the mustache and said: “That remark overheard wasn’t about you. I’m sorry if you think so and I want to apologize.” The Italian rose, stared at Kelcey and said: “Me no spik English.”
His hobby is collecting newspapers with typographical errors.
He carries a watch which would be a burden for a Singer midget. Instead of the customary numerals there are Hebraic letters.
He can and does eat anything. His favorite dish, however, is knackwurst completely buried in sauerkraut.
The thing he cherishes most is his name plate in the Chanin Theatre. When first nighting there he polishes it with his sleeve.
He dines daily at every table in Sardi’s.
Whenever anybody becomes angry with him, he buys that person a present with the hope of becoming friendly again.
He wobbles when he walks.
His monthly telephone bill is very low. He seldom calls anybody. Whenever he wishes to speak to someone on the phone he sends the party a postal card asking that person to call him.
He never walks out on a show no matter how ba it is. However, one evening he was seen leaving the theater before the end of the musical comedy. The producer of that show called him up the next day to learn why. Luckily, Kelcey wasn’t home. But his wife was. After listening to the manager’s complaint about Kelcey’s walking out, Mrs. Allen said: “I’m so sorry and I do hope you’ll forgive him. You see, Kelcey walks in his sleep.”
He memorizes obituaries. He would like nothing better than to be able to read his own.
If you enjoyed this post, please consider
supporting Cladrite Radio on Patreon