This group’s an exceptionally long one, so we’ve viewed it in three installments. This week, Q-Z.

Quality beyond the call of duty (Nunn-Bush Shoes).
Quality in tires is the key to safety (U. S. Rubber).
Quality tells, economy sells (Red & White Food Stores).
Quality you can taste (Adhor Dairy). 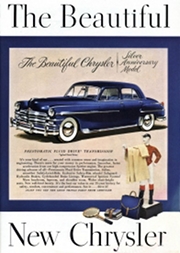 Safety for your daintiest garment (Missouri Dye Establishment).
San Francisco discovers a Golden GAIT (Chrysler).
Santa Fe all the way (railroad).
Satin-finish lipstick, petal-finish face powder, The (Tangee).
SAVE, from the bottom up (Cat’s Paw Rubber Heels).
Save to build, build to save.
Save to educate your child, educate your child to save (Savings Bank).
Save wandering and wondering. Give Walnut this Christmas (Walnut Tobacco).
Save yourself two rubs out of three (P & G Soap).
Scents-ible Christmas, A (perfume ad).
Scotch price that helps every budget, A.
Season’s eatings brings season’s greetings, The (Dole Pineapple).
Second-helping flavor.
SEE story of the year, The (Body by Fuller).
See twice as much for half as much (Southern Pacific).
See us at your earliest inconvenience (pawnbroker).
Seen in the smartest places where the smartest car belongs (Oldsmobile).
Send-off breakfast of flavor-packed whole wheat, The (Shredded Ralston).
Serve this feast for four in a thrifty jiffy (Armour’s Treet).
Serve up meat as a succulent stew, a robust roast or a glorious grill.
Service beneath the surface (Todd Shipyards).
Service to transportation is a service to the nation.
Service with a smile (Ford Trucks).
Set it—and forget it (Silex Coffeemaker).
Shapely as an hour-glass, slim as a cigarette (Taylor’s).
Shave the surface and you save all (Schick Shaver).
Shave of your life for the rest of your life, The (Eversharp Schick Razor).
She gave me BRIDE ideas (Kleenex).
She was beautiful in her sleep because her skin was wide awake (Woodbury’s). 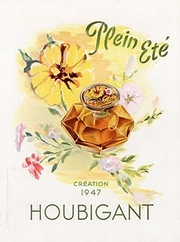 This group’s an exceptionally long one, so we’ll view it in three installments. This week, G-P.

Gay and spirited as young laughter (Skylark Perfume).
Gay as May (Textron Summer Blouses).
Gentle dental care (Teel).
Gentlemen, be treated (P. O. N. Beer).
Get an inCENTive, then put in the CENTS (Savings Bank Assn.).
Get more, get Kelvinator.
Get more go from every gallon (Oldsmobile).
Get your furnace off your mind (General Electric).
Get the DROP on that COUGH (Dean’s Cough Drops).
Gets at the core of every cleaning chore (Softwash Cleaner).
Gift she’ll open every day, A (G. E. Refrigerator).
Gift that keeps on giving, The (RCA Victrola).
Gift that really remembers, The (Kodak).
Gift with a lift, A (Paris Garters).
Gifts men like to give and gifts that men like to get. 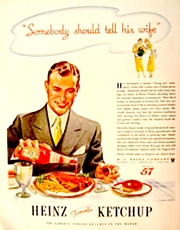 Give his neck a break (Van Heusen Shirts).
Give them ALL a good time (Telechron Clock).
Give your car an extra year of youth (Cities Service Gasoline).
Give your child a CAREER for Christmas (Royal Portable).
Gives your smile breath-taking beauty (Calox Tooth Powder).
Gleaming silver on your gown, but no shine on your nose (Woodbury’s).
Glorifies every dish it touches (Heinz Ketchup).
Glorifying the world’s fare (Heinz Ketchup).
Glue without goo (Casco Cement).
Good eyesight is the gateway to better living.
Good flour is the foundation of good baking.
Good for everything you bake and everything you bake with it is good (Gold Medal Flour).
Good name to go buy, A (Old Hickory).
Good taste in a remedy (Alka-Seltzer).
Good to be in, good to be seen in (Pontiac).
Good to the last luscious left-over (Swift meats).
Goodbye to the bugaboo of boil-away (anti-freeze).
Gracious gift to a house you love, A.
Grapefruit drink that gives you GO (Squirt).
Great American family car, The (DeSoto).
Greatest invention since the FACE, The (Vestpok Dry Shaver).
Grime does not pay (A-C Spark Plug).
Grime does not stay (Koroseal Curtains).
Gripes of wrath, The (Pepto-Bismal).
Guardians of good grooming (Owens Brushes).
“Guest-quality” margarine, The.

Hair relief without the grief (Gilbert Vitalator).
Has that knack for meal or snack (Delta Cocktail Onions).
HAT ease on the home front (Champ Hats).
Have a dish of sunshine and have the laugh on winter (Del Monte Pineapple).
Have fun, be gay on the Santa Fe (Pullman Coach)
Have teeth that shine like the STARS (Calox Tooth Powder).
HE builds a house, SHE make a home (McCall’s Magazine).
He has “hayfield” hair (Kreml Hair Tonic).
Head-spinning, heart-winning perfume, A (Frolic).
Headway for Spring (Ladies’ Hats).
Heart to heart fragrance, A (Coty).
Hearts in harmony until she smiles (Ipana Toothpaste).
Heart-winning, head-spinning (Frolic Perfume).
Heats the room, not the chimney (Duo-Therm Oil Burner).
Heavenly aroma that hangs like a fragrant halo ’round your coffee pot (Wakefield Coffee).
Heinz make YOUR soup YOUR way.
Help RCA help USA (production drive).
Help your beauty bloom this spring (Ivory Soap).
Here’s arch relief beyond belief (shoes).
Here’s riding at its LEVEL best (Oldsmobile).
He’s a man after my own hands (Hind’s Lotion).
He’s stone deaf until you say RITZ (crackers).
His duty to serve, hers to inspire (Coty Cosmetics).
Holds your foot like a gentle hand (Selby Shoes).
Home Tweet Home (name for a bird house).
Home with a smile is the home with a Hoover, The (vacuum cleaner).
Hot, but NOT bothered (Havoline Motor Oil).
How is your Vitamin “see”? (Oculist’s ad).
How many kisses in a cake of soap (Cashmere Bouquet).
How to be happy though harried (Miami Beach).
How to get a Pike’s pique (Montague Fishing Rod).
How to give a budget supper a banquet air (Stokely’s Finest Canned Foods).
How to hold youth and retard old age (Florida Grapefruit Juice).
How to make a bright child brighter (Royal Portable).
How to make a man’s face glow on a dark morning (Pillsbury Pancake Flour).
How to make light work of heavy meals (Del Monte Canned Food).
How to put the lovelight in her eyes (Whitman’s Chocolates).
How to RING a wedding belle (Kreml).
How to TREAT guests (Campbell’s Tomato Soup).
Hug you love, The (Holeproof Luxite Girdles).
Hungry for sunshine? Have it sliced (Del Monte Pineapple).
END_OF_DOCUMENT_TOKEN_TO_BE_REPLACED 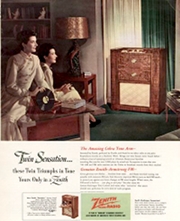 This group’s an exceptionally long one, so we’ll view it in three installments. This week, A-F.

Absence makes the meat grow tender (Hotpoint range).
Across the continent in comfort (Ford).
Add sparkle to your breakfast and sparkle to your day (Sunsweet prunes).
Adds life to your charm and charm to your life.
Again a year ahead (Zenith radio).
All for fun and fun for all (Step Lively, a movie).
All is not new that glitters (Old Dutch Cleanser).
All-out aid for a hungry man (Campbell’s soups).
All that’s best at lowest cost (Chevrolet).
All the dirt, all the grit, Hoover gets it every bit (vacuum cleaner).
All the way with Chevrolet.
All the world loves a happy BLENDING (Calvert).
All-fluid drive belongs to Dodge, the results belong to you.
All through your beauty sleep your skin must stay awake (Woodbury’s Cold Cream).
All ways right with Willsonite (sun glasses).
Always a good companion (Dutch Master Cigars).
American marches forward on TIME (Hamilton Watch).
An Equitable Life Annuity puts gold in your purse when there’s silver in your hair.
An extra trifle buys this eyeful (Buick).
An eye for comfort (Willsonite Sun Glasses).
An eyeful of fashions, a buy full of features (Buick).
An old-time soup hits an all-time high (Campbell’s Soup).
Anatomic energy (Gold Center wheat cereal).
And the bride served happily ever after (Community Plate).

And the world will approve your choice (Cadillac).
Announcing a new RING champ (Super-X piston rings).
Answer to a modern’s prayer (Nescafe).
Any mountains you want moved? (Association of American Railroads).
Appetites don’t take vacations (Campbell’s Soups).
Apt for autumn appetites (bread).
Arabian nighties (Arabian nightwear).
Are you one of the “Battered bonnet brigade”?
Are you pensioning your shirts too soon? (Wings Shirts).
Are your cocktails such great shakes? (Heublein’s Club Cocktails).
As friendly as a letter from home (Wine Advisory Board).
As American as Yankee Doodle (CAmpbell’s Chicken Noodle Soup).
As cold as the North Pole, as constant as the North Star (Lektrelite).
As comfortable as a kitchen before a fireplace (Sloan’s Liniment).
As distinctive as a voice, as pleasant as a friendship (G. & D. Vermouth).
As flattering as flickering candlelight (Dorothy Dodd Shoes).
As flexible as your feet (Smith Shoes).
As intimate as firelight, as infinite as the stars (Steinway Pianos).
As mischievous as a sidelong glance (Adrian perfume).
Ask your mirror about your mattress (Beautyrest).
At HOME in more than a million homes (Click Magazine).
At the head of every Easter parade (hats).
Avoid moving daze.
Awards for some, rewards for ALL (McGraw-Hill Magazines).
END_OF_DOCUMENT_TOKEN_TO_BE_REPLACED

As we said last week, our long march through the various categories of commercial slogans collected in Williams Sunners’ 1949 tome, American Slogans, is nearly at an end. We have remaining only a few broader (though no less compelling) categories. This week’s collection is categorized by Mr. Sunners as “Unclassified.” What’s the difference between that and last week’s category, Miscellaneous? Frankly, we have no earthly idea. 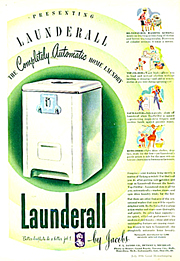 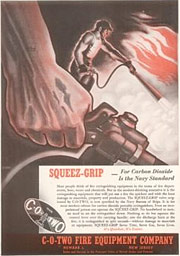 As the Pitch Perfect series continues, we today feature a 1949 collection of advertising slogans used to market companies and organizations involved in safety.

Automatic fireman on the wall, The (Shur-Stop Mfg. Co.).

Drinking and driving do not mix (Seagram).

If you drink, don’t drive; if you drive, don’t drink. 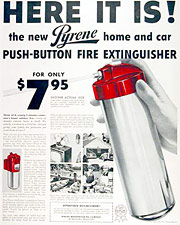 Oldsmobile for safety first.
One of two might be you (National Safety Council).
Otis, the world’s word for elevator safety (Otis Elevator Co.).

Pays for itself by what it saves (Iron Fireman).

Safeguard your home with a Belknap sentinal (Automatic valves). 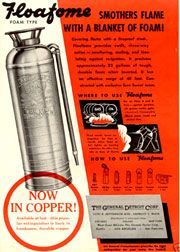 Thank your Bear man for your accident that didn’t happen (Bear Safety Device).
There can be no compromise with safety (Am Chain Co.).

You can’t ride home on an insurance policy (Foamite-Childs Corp.).
Your safety is our business (Hazard Wire Rope).