Here are 10 things you should know about Phillips Holmes, born 115 years ago today. We even explain why the star-crossed actor was given a plural first name. 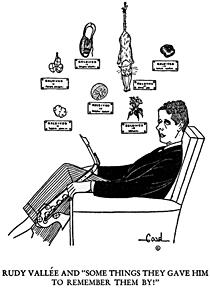 The night before that I was at the Cotton Club on a party and Agnes was complaining generally about things. Referring to Rudy, her pet knick-knack at the moment, she came out with some pertinent remarks. She was feeling pretty bitter about “Sleepy” Vallée. Finally she cracked:
“He’s supposed to be what girls are before they’re married.”
“You mean a virgin?” somebody asked politely.
“Well, I suppose so,” Agnes retorted.
But Agnes was very optimistic, because nowadays the only virgins on Broadway are the lady at the foot of Civic Virtue and Mitzi Green. Well, I’m sure about Mitzi.
Immediately following that Cotton Club party, which ended about noon the next day, I was walking down Broadway on my way to work when a man I knew stopped me a moment to chat. He happened to be a member of Owney Madden’s mob, but that was all right with me just as long as he mentioned mother once in a while.
We had been standing there for a few moments when another fellow passed us and signaled “hello” to the man to whom I was talking. It seems he said hello to me, too, but I didn’t hear him, and besides I’d never seen the zany before in all my life.
He seemed to resent my not talking to him because after taking a few steps he turned around and sneered something that sounded like “lousy broad, not saying hello to a guy” through the corner of his tobacco-stained mouth.
“Know that heel?” my boy friend muttered.
“I never saw him before in my life,” I told him.
“Well, what do you know about that?”
I didn’t think anything of it because the little fellow had kept on walking after saying something that was supposed to be an insult. I forgot the whole incident in a moment.
But my friend didn’t forget it. At three o’clock that same afternoon one of the big boys of the mob was around at Sardi’s.
“You Renee Carroll?” he asked, looking around shiftily.
“Yes.”
“Well, Owney Madden wants to see you right away.”
“See me? Don’t be silly. What’s the idea?”
“You ain’t done nothing, sister. It’s just to talk for a coupla minutes. Come along, you won’t get hurt.”
Little Renee decided it best to go along quietly, and I got my hat and coat and followed the apparent gangster to a building in the West Forties where we entered an office marked with the name of some phony real estate company.
Once inside we entered an inner office and I was confronted with what seemed to poor me to be a scene out of an M-G-M gangster picture.
Seated around a long table were a dozen of the Owney Madden mob. They were all fairly nice-looking boys, leaning a bit toward the fat side and muscular enough to be ample guard for the “chief.” Owney himself, the man who has his finger in more rackets, night clubs and other ventures in New York City than any other individual, was at the head of the table. I knew him fairly well.
We exchanged greetings.
“Everything all right with you, Renee?” he wanted to know.
“Sure, Owney. Everything’s fine.”
“Positive?”
“Yeah, certainly. Say, what’s the idea of the city fathers meeting here? I’m not on the spot, am I?”
The boys didn’t snicker. They kept straight faces. I sensed that something important was turning over in their minds. Owney came around to where I stood.
END_OF_DOCUMENT_TOKEN_TO_BE_REPLACED