We spent much of yesterday poring over vintage tchotchkes, clothes, and ephemera at various flea markets and vintage emporiums, and one yellowed poster-board advertisement for beer (Pabst Blue Ribbon — not Piels, as pictured) caught our eye. 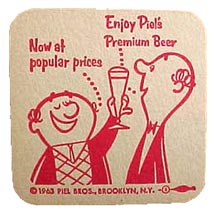 “Now at popular prices!,” the poster announced proudly — which brought two or three things to mind for us.

First, we wonder when and how the term “popular prices” fell out of use. It’s a usage that was once quite frequently seen, and we kind of like it. Prices people can get behind!

And we were taken aback a bit by the notion that PBR, a beer now widely thought of as bargain beer, was ever sold at anything higher than “popular prices.” We know that products often sink in the collective esteem of the public, and sometimes they rise, mostly on the strength of savvy marketing, but touting a beer as now available at newly lower prices strikes us as admitting defeat, in marketing terms.

Though, we suppose, if a product was long viewed by average Joes and Jills as high-end and pricey, making it available at popular prices might have been viewed as purely a positive thing and a surefire way to boost sales. But that strikes us as a panicky move likely to yield only a short-term benefit. It seems unlikely a product, having surrendered its status as a luxury item, could ever regain its high-end cachet.

But as we said above, sometimes it works the other way around. We read somewhere that Cutty Sark, for years positioned as a budget-priced scotch, was transformed into a premium whiskey merely by marketing it as such. The price was increased significantly, and an extensive ad campaign was launched with the intent of altering the imbibing public’s perception of the Cutty Sark brand.

It worked. While Cutty is far from being the current “it” brand of scotch (and hasn’t been for a long time), it’s still perceived as a premium whiskey and has a small but loyal following it might never have acquired if that marketing makeover hadn’t been undertaken all those years ago.

That campaign moved Cutty from being popularly priced to the top shelf, and the whiskey itself went unchanged. Only the public’s perception of it was altered.

Of course, that’s nothing compared to the 180-degree turnaround managed by Philip Morris with their Marlboro cigarettes. Once marketed as a “lady’s cigarette” to women of refinement everywhere — the brand’s slogan in the 1920s was “Mild As May” — Marlboro eventually came to be positioned, instead, as the smokes purportedly preferred by rough, tough cowpokes.

That drastic a transformation requires some serious marketing muscle and know-how.