The days remaining in our April fundraising drive are dwindling down. If you’re even an occasional listener, help us pay the annual bill to our streaming provider. $40 covers an entire month, but literally any amount is appreciated. If you like our toe-tapping tunes, don’t take them for granted. Let us hear from you by clicking the link below and sending us a little love via Paypal.

Charles Ray was a popular juvenile star in the 1910s and ’20s, but by the ’30s, his career was on the rocks, and he turned to writing. Here’s another in a series of offerings from his book, Hollywood Shorts, a collection of short stories set in Tinseltown.
*    *    *
The Studio Cat
The studio gates swung open wide to admit a stately car. Disdaining the action, the studio cat jumped into the gateman’s cushioned chair and sat like a king upon his throne. For a moment he wrestled with hate, then venom won. He lifted his percussant tail high into the air, and with a follow-through stroke to shame any golfer, gave it a quick nuts-to-you snap at the limousine housing the unpopular star.
Blackie felt better. This antipathy had continued ever since he had been borrowed from the gatekeeper to appear in the kitchen scenes of a motion picture. Later, a few fan letters arrived, addressed to Blackie, the Studio Cat. Some of the stars on the lot had laughed at the idea of a cat getting fan mail, which made existence unbearable to Blackie. He would not go on the stages any more, but he would go under them. He would never act again, but he would snap his tail at the egotistical offenders.
He was a wise cat; he had seen plenty of changes on the lot in a few short years. No one had roamed the lot as long as he. They came and they went, made their mistakes as silly humans do, and were seen no more.
Even now, he could but lift an eye to the top of the administration building and see the manifestation of human stupidity.
Someone in charge had forgotten to turn the switch that extinguished the huge electric sign. It was past 9 a.m. Stockholders’ money was being wasted as the sign blinked and flickered in the sunlight, spelling out Metro-Goldwyn-Mayer with intermittent flaring initials: M-G-M.
With the utmost contempt, Blackie turned his attention to his morning titivation. First, he lifted his jet-black fur, with an eye for fleas, and then pasted it down with liquid artistry most amazing.
“Meow,” called a restaurant cat from the Greasy Spoon Hash House across the street, and included the password.
She pushed her fat hulk through the iron bars of the gate and slunk along the casting-office wall, slowly giving herself a salt rub on the rough stucco surface. Then too there was another reason for tarrying. She really could not enter the sanctum of the regal studio cat without proper welcome. The studio cat wasn’t exactly high hat, but his hauteur was occasionally cataphractic. And so the restaurant cat poised herself at a safe diplomatic distance from the gateman’s chair, repeated the password, and sat on her haunches waiting patiently, blinking both eyes for needed occupation.
Presently, after giving himself a thorough caticure, Blackie pronounced a good-morning caterwaul in pleasant enough tones as to make the coveted invitation valid.
Approaching perfunctorily, the restaurant cat moved in front of the gateman’s chair, salaamed like a courtier respecting the throne, and whispered for court information.
“How’s tricks? Any new scandal?” she gossiped.
“Nothin’ to chew on,” Blackie replied as if bored. “There hasn’t been a scandal in a hell of a while. Will Hays is very active again, you know, politics and all that. By the way, I’m going to a little cleaning up of the studio on my own, tonight. I’m giving a banquet under stage four at midnight.”
“Really? How nice.”
“Yes, if you care to join, please say so at once. It will be a sit-down supper; so naturally I don’t want an odd number. I’m not at all superstitious, but my guests, you know—I don’t want thirteen.”
“You said a mouthful!” The restaurant cat licked her chops. “Then I’ll see you after twelve?” she punned and was sorry.
The studio cat rolled his eyes immorally, forcing the restaurant cat to leave his presence.
At nine the next morning, after a night of righteous debauchery, the cats sat in the same positions by the entrance gate, discussing the night’s orgy in low-toned confidence.
The studio cat cast his good eye upward, and again noted the stupidity of human beings. The incandescent bulbs in the huge sign over the administration building were blinking uselessly in the broad daylight, spelling out Metro-Goldwyn-Mayer after each flash of the initials: M-G-M.
“Well, ol’ thing,” Blackie wisecracked to the restaurant cat, “M-G-M may mean Metro-Goldwyn-Mayer to humans, but to me it means Mighty-Good-Mice.”

That roster of once-prominent scribes moves one to ponder the fleeting nature of fame. How many of those names are familiar to the average person today? An entirely unscientific survey we conducted found that most folks recognize exactly one: Zane Grey. The others, it seems, are all but forgotten. It’s as if Stephen King, David Sedaris, Dan Brown, Dean Koontz, J. K. Rowling and another handful of today’s most prominent authors teamed to write a serialized novel that was then made into a movie. Would movie buffs in the year 2090, while watching that picture, scratch their heads over the identities of these writers?

We did a little digging on The Woman Accused‘s ten authors and found Parrott most intriguing. She was sort of the Candace Bushnell of her day, trafficking in proto-chick lit that examined the trials and tribulations endured by the “New Woman” of the 1920s and the freshly minted morals by which she lived.

Born in Boston in 1899, Parrott graduated from Radcliffe. She moved to Greenwich Village in 1920, where she married the first of her four husbands, Lindesay Marc Parrott, in 1922. The Parrotts divorced in 1925. Parrott wrote what she knew in composing her first novel, Ex-Wife, in 1929. The book’s subject matter was so scandalous in its time that it was initially published anonymously. Despite that (or perhaps because of it), it sold more than 100,000 copies the first year. Ex-Wife tells the tale of Pat and Peter, a married couple in their twenties who are convinced they needn’t follow the old rules in the pursuit of marital bliss. But when Peter, who has strayed, learns that Pat has done the same (just once, and in a tipsy moment of emotional weakness), his attitude toward her behavior is no longer so modern.

The rest of the novel is devoted to Pat’s coming to terms with her new status as an ex-wife. From our 21st century perspective, Pat’s post-split behavior is not especially shocking—she allows herself a few dispassionate flings and submits to the abortion of a pregnancy for which Peter is responsible. Having moved out of the apartment she shared with Peter, Pat rooms with Lucia, a woman in her thirties who, having already undergone the transition from wife to ex-wife, serves as a soothing and encouraging mentor to Pat. They are two fashionable, well-read, cosmopolitan women navigating an existence that more closely resembles life in 2011 than one might expect.

Author Francine Prose, in her introduction to the 1989 reissue of Ex-Wife wrote: “It’s striking how much of Ex-Wife seems far less dated than many of [F. Scott] Fitzgerald‘s Jazz Age stories”—and it’s true. Pat’s daily life comes off as remarkably similar to those led by so many urban, urbane women today.

MGM paid the then-extravagant sum of $20,000 fro the film rights to Ex-Wife, though the resulting picture, 1930’s The Divorcee, starring Norma Shearer and Chester Morris, is at best a loose adaptation of Parrott’s novel. That didn’t keep her from answering the door when Hollywood again came knocking. Between 1930 and 1936, eight more pictures were made based on Parrott’s novel and stories.

As a writer, Parrott was at her most successful between 1929 and the early 1940s. Her son has estimated that she earned in the neighborhood of $700,000—between $8-$10 million in today’s dollars—over that span. But Parrott spent the money as quickly as she made it, and when her career began a slow but steady slide in the ’40s, there was little left to show for her successes.

Like her fiction, Parrott’s life was not without its marital disruptions and scandals. Wed and divorced four times, she found herself hauled into court in 1943 for helping a young soldier escape from military prison. What’s more, the soldier was accused of trafficking in marijuana. Parrott was also reportedly the victim of numerous attempts at blackmail, and in 1953 she was again in the news when, as Time magazine reported, “her hotel presented a $225.20 bill and refused to accept her check.” Parrott spent 30 hours in a jail in Delaware County, Pennsylvania, with her French poodle, Coco.

In 1957, Ursula Parrott died of cancer at age 58. Her final days were spent in the charity ward of a New York City hospital. Today, the once-celebrated Parrott is so little remembered that only recently was she finally given an entry at Wikipedia, that online repository for otherwise forgotten figures. When first we composed this account, in the summer of 2010, no entry for her was to be found there.

This article originally appeared in the Fall/Winter 2010 issue of Zelda, the Magazine of the Vintage Nouveau. 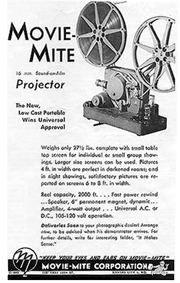 As the Pitch Perfect series continues, today we feature a 1949 collection of advertising slogans used to market movie studios and other entertainment companies.

Everything for your entertaining needs (The Bar Mart).

If it’s a Paramount picture, it’s the best show in town.

Keep your eyes and ears on Movie-Mite (Kansas City, Mo.).
King can have no more, A (Paramount).

More stars than there are in heaven (MGM). 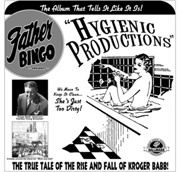 Out of the reels come real stories (Royal).