We’re a little late in noting the passing of the great Japanese actress Isuzu Yamada, who died at the age of 95 on July 9th. 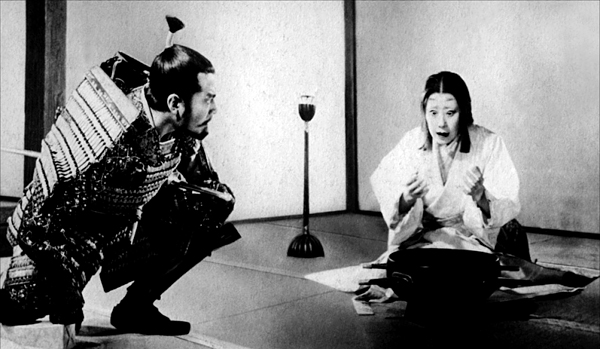 Ms. Yamada’s career was an impressive one, spanning more than seventy years over eight decades and including work in classical and contemporary theatre, motion pictures and television.

Film critic Pauline Kael wrote of Yamada’s work in Kurosawa’s Throne of Blood, an adaptation of Shakespeare’s Macbeth, “There may never been a more chilling Lady Macbeth.”

Peter M. Grilli, president of the Japan Society of Boston, told The Washington Post, “[Yamada] was always the tough girl in movies. If I had to compare her to an American actress, I’d say she was a combination of Bette Davis and Joan Crawford—a very tough, self-aware, aggressive personality.”

For Cladrite readers who may not be familiar with Ms. Yamada’s work, Netflix offers seven of Ms. Yamada’s pictures, spanning a 48-year period.

For more on Ms. Yamada’s life and career, check out the obits at the Washington Post and the New York Times.

Any movie buff in the tri-state area with even the slightest interest in classic Japanese cinema should plan on spending a good deal of time on Houston Street the the next three weeks.

Beginning Friday, April 1, Film Forum will be presenting a don’t-miss opportunity to immerse oneself in pictures made by the greatest Japanese film directors of the 1930s, ’40s, ’50s, and ’60s and starring five of Japan’s most acclaimed actresses: Kinuyo Tanaka, Isuzu Yamada, Machiko Kyo, Setsuko Hara, and Hideko Takamine.

This quintet of amazing actresses are being feted by Film Forum with a retrospective that features films by such giants as Akira Kurosawa, Yasujiro Ozu, Kenji Mizoguchi, Keisuke Kinoshita, and Mikio Naruse.

The festival’s highlights are too numerous to cite, but we are especially fond of Takamine’s work, and she was best known for her work with the great Naruse, who, along with Kurosawa, ranks as our favorite Japanese director, but honestly, you could make your way to Film Forum on a daily basis throughout the retrospective and experience no regrets.

But if you can make only a few bills, we recommend the Naruse double-bill of Yearning (1964, Takamine) and Repast (1951, Hara) on Tuesday, April 5; Naruse’s Okaasan (Mother, 1952, Tanaka), the double bill on Saturday, April 9, of Kurosawa’s Rashomon (1950, Kyo) and Mizoguchi’s Ugetsu (1953, Tanaka); Ozu’s Tokyo Story on Sunday, April 10, and Monday, April 11 (1953, Hara); Naruse’s Flowing (1956, Yamada, Takamine, Tanaka) on Tuesday, April 12; and … well, honestly, it’s a pointless exercise to try to recommend particular highlights. The entire retrospective is worth experiencing.

Clear your schedule, buy a Film Forum membership (you’ll save on admission), and save us a seat on the aisle, please.