At first glance, it appears to be simply a promotional headshot of once-popular leading man Warner Baxter with a printed autograph (which is surprisingly convincing, by the way—we were briefly fooled into thinking we’d scored an genuine autographed photo of Baxter for a mere five smackers), but turn the photo over, and voila—it’s a programming schedule for three different New Jersey theatres. Part of the name is missing from the top theatre, but a little research has us convinced it was the Branchville Theater in Branchville, New Jersey. All we’ve been able to ascertain about the Branchville is that it was listed in the Film Daily Yearbook in 1944 and 1951, and on one weekend in 1937, they screened The Awful Truth, with Irene Dunne and Cary Grant, Angel with Marlene Dietrich, Herbert Marshall, and Melvyn Douglas, and Conquest, starring Greta Garbo and Charles Boyer.

Here’s a pair of then-and-now photos of the Colonial. Word has it, it’s now a private residence and no longer the hardware store it was in 2007, but we have no proof of that. 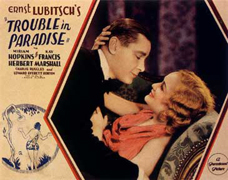