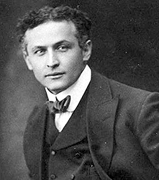 It’s remarkable to consider that a magician who died nearly 84 years ago is still remembered today, but that says something about Houdini’s popularity and influence and the amazing feats that fueled them.

Groucho Marx used to tell a story about seeing Houdini perform on Broadway back in the 1920s, when the Marx Brothers were themselves wreaking comedic havoc on the Great White Way.

Houdini, about to perform one of his patented escape tricks, asked for a volunteer from the audience to come up on stage to confirm that Houdini had no hidden picks or other tools to aid him in the escape.

Groucho, unrecognizable without his greasepaint mustache, took the bait and made his way up to join the magician onstage.

“Look in my mouth,” Houdini instructed Groucho, “and tell me what you see.”

Groucho took his time peering into the magician’s maw before proclaiming, “Pyorrhea!”

It’s perhaps not as widely known of Houdini that, in addition to his stage career, he had a nice run as a silent movie action star. Kino has a three-disk, 450-minute collection of his pictures, Houdini: The Movie Star, out on DVD, the trailer for which can be seen below.