Hey, everyone—it’s National Pie Day! Here’s hoping you find the time to enjoy a slice (or two) with your pals—or even your best guy or gal!

And while you’re at it, why not enjoy this rendition by Fred Waring and the Pennsylvanians of Irving Berlin‘s ode to pie, coffee and a positive outlook!

In Chapter Six of Rudy Vallée’s 1930 memoir, Vagabond Dreams Come True, Rudy continues his tutelage on organizing and leading a dance orchestra in the 1930s (we can’t help but wonder how many of Rudy’s “lessons” would still apply today).

Rudy discusses the role showmanship, and especially clowning, plays in a successful orchestra’s performance. And it’s interesting to note from Rudy’s remarks that, even in 1930, most fans attending a live show by their favorite performers made it a practice to request the orchestra’s most popular hits. We wonder if they held up cigarette lighters when requesting an encore at show’s end?

Closely indentified with showmanship, in fact practically part of showmanship (and vice versa) is what the professional terms “hokum”; that is, something to amuse, to attract the eye and to tickle the sense of humor. Very few dance orchestras really use hokum at all, or at least to any extent, and most of those that do use it put it in either between dances or at intermission.

A few, however, were wise enough to realize that as the couples dance around there is very little to occupy their minds unless they are engaged in conversation. Usually I find that the fellow and girl do not converse as they dance; rather does the eye seek something to engage its attention. Of course one may watch the other couples, or those on the side-lines, or the orchestra.
I firmly believe that the dance orchestra will never be replaced by any form of mechanical music, regardless of how lifelike the mechanical orchestra may be; and the reason is not hard to find. The dancers want to watch the music being made and in turn enjoy being watched by the producers of the music. Put several couples in a room with a large orthophonic phonograph and see how quickly they become tired of dancing. Unless it is absolutely impossible to secure a dance orchestra composed of human beings, a crowd will not be content to dance to mechanical forms of music.
That is where hokum comes in. The band that can put on little skits and comedy numbers with props and apparatus while the crowd is dancing has a tremendous edge on dance orchestras that simply produce beautiful, rhythmic music. Such an orchestra may rightly be termed an entertaining orchestra because they engage the eye while they entice the feet to dance and soothe the mind with music.
After the success of our first comedy number I saw that we had the ingredients for a “hokum” band as well as a “sweet” band, and proceed to develop this side of our work.
My little violinist, De Vorzon, is a sort of buffoon. He has a personality that bubbles over and expresses itself in a dozen and one crazy antics and ideas, and as we play up to each other in our comedy numbers he reacts upon me and makes me quite a different individual for the moment.
Then my drummer, Toland, with his extreme size and happy-go-lucky personality, and Miller, my tenor sax, who has a mania for making almost as faces as Lon Chaney, have help make many a comedy number extremely laughable.
The germ of the idea is often mine and the subsequent outline I usually develop, but it is the little extemporaneous bits that the boys themselves think of, that top off or complete the comedy sketches which we present even while the crowd is dancing.
Our first comedy number was a tune which I had been playing for several years. It was an old college tune which had only been played by two bands, our own and the orchestra directed by the boy who wrote the tune. Years before I heard it with each word and or line capable of illustration in pantomime in songs at dances.
The first tune which gave me this idea was a number from one of the early editions of the “Scandals” called “The Gold Diggers.” In this number the word “dig” was illustrated by pantomime digging; the word “swim” by the movement of swimming; “Fifth Avenue” by five fingers of the hand held upright, etc.
Gestures done by one man alone are hardly noticed, but when done by the front line of the band in perfect unison they hold the audience quite spellbound, and it was nothing unusual for the crowd to stop dancing and gather around us during the course of such a chorus.

END_OF_DOCUMENT_TOKEN_TO_BE_REPLACED 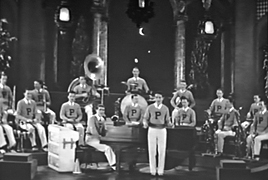 Did you know Fred Waring, the popular bandleader of the 1920s and ’30s so often heard on Cladrite Radio, was the man behind the Waring blender?

Mind you, Waring didn’t invent the blender, but he financed it and promoted it, eventually lending his name to the company that produced it.

And originally, they were called Waring Blendors — the O was Waring’s idea.

Waring’s dance orchestra was very popular and lots of fun, but he eventually went with more of a choral sound, using “glee clubs” and choruses on his records. And though by doing so, he lost us as listeners (sorry, Fred), it paid off for him in the long run, as he expanded into television with “The Fred Waring Show” on CBS. The popular program ran from 1948 to 1954.

To celebrate this new (to us) tidbit of trivia, we’re offering two of our favorite Waring recordings and a video of Waring’s Pennsylvanians backing up Morton Downey, Sr., on a peppy little number.

Fred Waring and His Pennsylvanians — “Picnic for Two”

Fred Waring and His Pennsylvanians, feat. Chick Bullock — “Let’s Have Another Cup of Coffee”