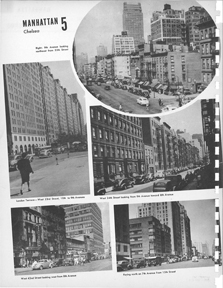 It’s always a treat to get a glimpse of the city you live in as it was once was, and it’s perhaps even more of a delight to get a 70-year-old overview of the very neighborhood in which you reside.

1940sNewYork.com is a fun site that revisits neighborhood profiles that were first published in 1943. As is described on the site, “In 1943, four local newspapers published a New York City Market Analysis. Largely forgotten in the 70 years since, the document provides an amazing window into New York’s neighborhoods of that era.”

The intro continues, “The 250-page Market Analysis provides hundreds of photos & color-coded maps, statistics, and short narratives about neighborhoods across the city. The statistics and maps are based on the 1940 Census, providing a rich complement to the individual 1940 Census records that are available online.” 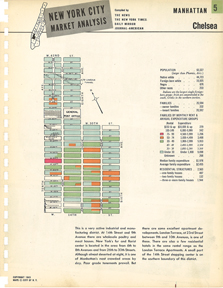 What did we learn about our own neighborhood of Chelsea? We learned that the average rent on our block in 1943 was between $30-49. It’s now perhaps 100 times that (we live in a rent-stabilized apartment, so we’re not sure what the average monthly tariff is for non-stabilized flats, but our own rent is 40 times that thirty dollars).

We also learned (well, had confirmed—we sort of knew it already) that, in those days, Chelsea was “a very active industrial and manufacturing district.” The overview mentions the meatpacking district, which, when we first moved to the neighborhood, was still going strong, but is now mostly chi-chi shops and expensive eateries and nightspots. And the manufacturing is mostly long gone; there are more art galleries than anything else in the neighborhood now.

In 1943, Chelsea was home to 20,584 families, of which Italians made up the largest single “foreign-born group.” And yet, we’re not sure we’ve ever encountered someone who was born in Italy in 23 years of residing in the neighborhood.

If you live in New York City, you’ll get a kick out of learning how your neighborhood has changed in the past 70 years; if you don’t, just pick a favorite area of the city and start exploring.