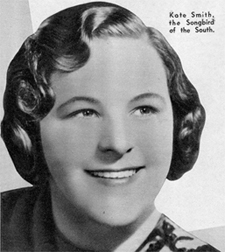 KATE SMITH believes that if you want a thing hard enough and long enough, you’re bound to get it. She ought to know, for she wanted to be an actress from as far back as she can remember, but she had a hard time getting started on her chosen career because her family wanted her to be a nurse.
Her family thought her acting ambitions were just kid stuff and Kate couldn’t seem to convince them otherwise, so she romped through school in Washington, D. C., and when she graduated from high school she obediently packed her things and went off to Georgetown to begin her nurse’s training in a hospital there.
Although her heart wasn’t in her work, for the call of the footlights had grown stronger with each year, Kate stuck it out for 12 months and then announced emphatically that she was through—that she and nursing did not belong together. At last her family gave in and she set off for a life on the stage.
She started in vaudeville and worked her way into musical comedies, appearing in “Honeymoon Lane,” “Flying High” and “Hit the Deck,” where her vocal talents were considered secondary to her antics as a comedienne.
Behind the footlights, executing stomp and tap routines which brought down the house, Kate learned to take wisecracks about her avoirdupois. This never bothered her, however, for she is as nimble and light-footed as only a professional dancer can be.
After several years in show business she had attained the rating of a good performer—but nothing more—when she was rescued from her comparative obscurity and her voice brought to the fore by Ted Collins, her present manager, who discovered her for radio.
This was in May, 1931, and the past four years have been eventful ones for Kate. She broke an all-time record at New York’s vaudeville mecca, the Palace theatre, and with equal ease “wowed” the sophisticated crowds in the Central Park Casino with her simple ballads. To further prove her versatility, she sang the area My Heart At Thy Sweet Voice to the accompaniment of the Philadelphia Symphony Orchestra, under the direction of Leopold Stokowski.
She made her movie debut in “Hello Everybody,” which was produced by Paramount, and attended her first and only big theatrical party when the film colony staged a special reception for her. She never goes to parties. She doesn’t drink, she doesn’t smoke, and she doesn’t like to talk about life. She believes that everything that occurs upon the earth is God’s doing and that’s that.
After two and a half years of continuous broadcasting on the Columbia network, manager Colins weighed offers for remunerative personal appearances from theatres and decided to produce a road show for his “Songbird of the South.” The result was a triumphant coast-to-coast tour with the “Swanee Music Revue” in which Kate headed a show of 30 performers. Three times a day for more than eight months she sang to crowded theatres:

“When the moon comes over the mountain
Every beam brings a dream, dear, of you.”

She was made an honorary member of practically every important organization in the United States, from the Kentucky Colonels to the Texas Rangers. In Sioux City, the Indians inducted her into their tribe as “Hom’b-o-hoo-win-ga” (Glory of the Morn).
When Kate returned to the air she did so with two distinct losses. One of hem was 20 pounds (which went by the wayside during her strenuous tour) and the other was her famous “Moon.” Yes, she had a new theme song Time to Dream, composed by her pianist arranger, Tony Gale.
One thing about Kate that will surprise you is the ease with which she moves about that 200 and some odd pounds of hers. She is big boned and the pounds are firmly packed. Her walk is sturdy and purposeful, and usually very fast—for she is nearly always in a great hurry.
She dresses so conservatively in blue, brown or print dresses—all of them specially tailored—that nothing but the possible exception of her weight gives her away to the average person on the street. She likes becoming clothes on herself or anyone else and waxes enthusiastic about well-turned-out people. However, she is not extravagant in this respect, but she does go for perfume in a big way and has nearly 1,000 bottles stored in her apartment. She doesn’t use much perfume on herself, though—“just enough to whiff.”
Kate wears no rouge and applies lipstick conservatively. She likes to set her own hair and manicure her own nails, to which she applies a bright rose polish. She likes to cook and has invented many tasty dishes, which she enjoys preparing for the small circle of intimate friends who drop in to visit in her small but comfortable apartment on Park Avenue.
She has definite likes and dislikes about almost everything, including songs. “Give me the old tunes every time,” Kate says. “There’s nothing like ’em for bringing back memories or to set everybody tapping their feet. There’s been a tendency among the music publishers to resurrect the old songs, make new arrangements for them, and put them on the market again. Personally, I’m all for it. The old folks prick up their ears and an old hit that’s tried and true will affect this generation and the next one with the same irresistible affection that it did the last or the one before that.”
Yea, verily! Kathryn Elizabeth (as she was christened) has traveled far since the day she first awoke in Greenville, Virginia, 26 years ago, but she’d still be nursing in Georgetown if it weren’t for her determination.
“I knew what I wanted and went after it,” says Kate, “and in all my professional life I’ve never played politics to gain an end. If I like somebody, I like ’em, and if I don’t like somebody, I don’t care who knows it or who they are. I think I’m more proud of this—of keeping my own integrity—than I am of anything I might have accomplished on the stage or over the air. Maybe it doesn’t always work out, but for me, at least, I have found that honesty is, indeed, the best policy.”
If you enjoyed this post, please consider
supporting Cladrite Radio on Patreon