As part of our ongoing look at old advertising slogans, culled from a 1949 book called American Slogans, we today feature a collection of slogans that were utilized by companies that manufactured and marketed >coughcough< cigarettes.

We suspect that no list of slogans we might ever share with you will make us cringe as much as this one does. It probably goes without saying (but we’ll say it, anyway) that we offer this particular group of slogans strictly as a look back at the culture of a bygone era, and not to promote smoking in any way, shape, or form. Quite the opposite. Here at Cladrite Radio, we often celebrate the past, but sometimes we’re about examining, with eyes wide open, the downside of life as it was lived in the first half of the 20th century.

Camels agree with me.
Camels ARE milder.
Camels suit your T-zone to a T.

Experience is the best teacher (Camels).

Fine tobacco is what counts in a cigarette (Lucky Strike).
Flavor’s all yours, The (Philip Morris).
For digestion’s sake, smoke Camels.
For real smoking pleasure (Chesterfield).

Have a Camel (R.J. Reynolds Tobacco Co.), Winston-Salem, N.C.
Have you tried a Lucky lately?

LS/MFT (Lucky Strikes).
Luckies are gentle on my throat.

Menthol-cooled (Spuds).
Mild as May (Marlborough).
Milder, better-tasting cigarettes, The (Regent).
Millions of Spud smokers can’t be wrong.
More people are smoking Camels than ever before.

Not a cough in a carload (Old Gold), P. Lorillard Co., New York.

One cigarette sold the world over, The (Melachrino).
Only Viceroy has this exclusive filter.

Password is Kools, The.
Perfect cigarette, The (Marlborough), Philip Morris.

Sensible cigarette, A (Fatima), Liggett & Myers.
Shilling in London, a quarter here, A (Pall Mall).
Smoke Omar for Aroma (American Tobacco Co.).
Smoothest cigarette, The (Old Gold).
So round, so firm, so fully packed, so free and easy on the draw (Luckies).
Spuds are soothing.
Such popularity must be deserved (Chesterfield).
Sum-total of smoking pleasure, The (Chesterfield).
Switch to Spuds. 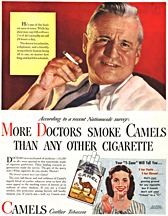 Taste is richer, yet the smoke is milder, The (Raleigh).
There’s many a castle built out of cigarette smoke (Bonded Tobacco Co.), New York.
There’s something about them you’ll like (Herbert Tareyton).
They are the largest-selling cigarette in America (Camels).
They cost no more (Regent).
They’re milder; they taste better (Chesterfield).
They respect your throat (Alligator).
They satisfy and yet they’re mild (Chesterfield).

Utmost in cigarettes, The (Egyptian Deities).

What a whale of a difference just a few cents make (Fatima).
Wherever particular people congregate (Pall Mall King Size).
Why be irritated? Light an Old Gold.
Why not smoke the finest? (Dunhill), Alfred Dunhill Co., London.
With men who know tobacco best, it’s Luckies 2 to 1.
World’s smoothest cigarette, The (Old Gold).