Hollywood Undressed, Part Two ⋆ Cladrite Radio
Skip to content
This is our final offering from Hollywood Undressed, a 1931 memoir attributed to the assistant of masseuse and health guru Sylvia Ulback, a.k.a. Sylvia of Hollywood (but actually ghost-written for Sylvia by newspaper reporter and screenwriter James Whittaker).
The second part of the book comprises Sylvia’s dietary and nutritional theories, and we weren’t going to share those here (they’re a little on the dry side), but we decided to say goodbye to Sylvia with the first chapter of that section of the book, which shares daily menus from the diets Sylvia assigned her various and sundry celebrity clients. “Who wouldn’t want to eat like Gloria Swanson or Constance Bennett for a day?” we asked ourselves.

1. FOOD AND ITS PREPARATION 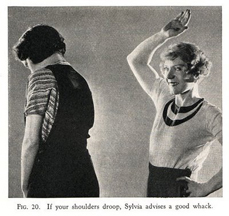 The diet below is the only fattening diet herein. Meals similar to these will build up your weight, but not at the expense of your health.
STEWED FRUIT. Fruit is stewed when there is any reason for avoiding raw foods. Raw foods are stricken from the diets of persons suffering from colitis or kindred disarrangements of the intestinal tract. Whenever you feel “out of sorts” you will do well to cut out raw foods from your diet.
When you stew fruit, do not cook the fruit until it is shapeless and tasteless. Follow this plan:
1. Cook the fruit whole, except those that must been peeled and cored.
2. Cover with cold sugared water.
3. Bring to a boil. Then take off the fire immediately and cool.
When you are on the non-raw food régime, salads are also cooked. Lettuce and other edible leaves are immersed in boiling water for two minutes and served as a vegetable.
9.  SYLVIA’S DIET LORE
(Diet fads come, diet fads go, but one thing never changes: the art of diet cooking)
MEAT
Pay no attention to meatless diat fads.
Broil or roast the leaner meats in such a way as to eliminate the fats, first by cutting away the visible excess before cooking and, second, by taking the measures I have described for eliminating contact between meats and their drippings.
Do not boil meats. However, you may eat cold boiled ham as often as you wish.
FISH
In contradistinction to meats, fish should be boiled. Only the lean varieties should be used.
VEGETABLES
Should be boiled or steamed in only as much water as will prevent burning and should be cooked no longer than is necessary to make them palatable.
The better parts of vegetables being absorbed in the cooking waters, preserve all of these for making the pure vegetable broths and soups you should habitually eat.
BUTTER
Harmless in small quantities if never cooked. Therefore butter should always be added to hot dishes with which it is served just before they go to the table. Sweet butter is best, and can always be obtained in Jewish stores.
EGGS
Dangerous on account of American distribution methods which provide the public with stale eggs. To be used only when they are certified to be not more than 24 hours old. Soft boiled, poached or incorporated into custards.
FRUIT
With the exception of certain berries which disagree with particular constitutions, all are excellent. However, when there is reason to suspect disorders of the digestive tract, they should be stewed, though not longer than it takes the sugared water to come to a boil.
CONDIMENTS, SAUCES
Always to be suspected. Salt fattens. Peppers, mustard, etc. are indigestible. Any sauce which has been fried is vile. Prefer mineral and neutral vegetable oils to olive oil. For vinegar substitute lemon juice. Avoid cocktail sauces with the exception of the plain and pure juices which are erroneously called cocktails.
SEA FOODS
With the exception of “lean” fish, they are generally to be avoided—especially the crustaceans.
NOODLES
Despite their starch content, they are non-fattening when eaten plain-boiled with melted butter. Helpful in all conditions involving irritation of the digestive tract.
And now to conclude with a diet day recommended to all who suffer from digestive disorders. If your digestive apparatus is on the blink, either because of disease or because of an excess, try living on this fare for a few days.