Charles Ray was a popular juvenile star in the 1910s and ’20s, but by the ’30s, his career was on the rocks, and he turned to writing.
Here’s another in a series of offerings from his book, Hollywood Shorts, a collection of short stories set in Tinseltown.
*    *    * 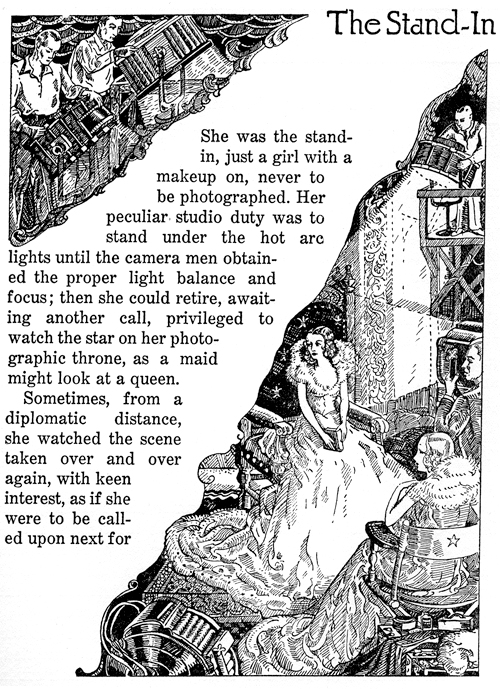 talent. But that indulgence had its monotonous reaction, for she was only the stand-in, just a girl with a makeup on, never to be photographed.
During the long day she could look at a movie magazine and absorb the happy glamorous life the stars were supposed to live. Yet she remained as distant from it and Hollywood as any ambitious youth who might be reading the same publication in some obscure eastern village, for she was only the stand-in, just a girl with a makeup on, never to be photographed.
Between scenes, if some noisy conference got under way, she could have a romp with the star’s pet pooch, provided she did not cause it to bark. Or she could indulge in a whispered conversation with the double, or work out a cross-word puzzle, or sit and dream and dream—any number of things in fact, if like a chastised child she was seen and not heard.
But there was more freedom when the director called lunch. She could hurry to the counter, and by picking the proper stool, sit and watch the famous personages through the half-drawn curtains of the private dining room.
The rest of the hour she could saunter about the lot, four blocks square—a city in itself—and gaze at the strange make-believe scenery the carpenters and painters were creating to enhance new scenarios. As she trudged over the cobblestones of a foreign-looking square, there was the thrill of dreaming about the characters that would soon inhabit and then desert it.
Also there were castles tall and imposing, inspiring to the imagination, deserted, with drawbridges broken, moats emptied, bombardment holes in the walls. A huge ocean liner, half cut in 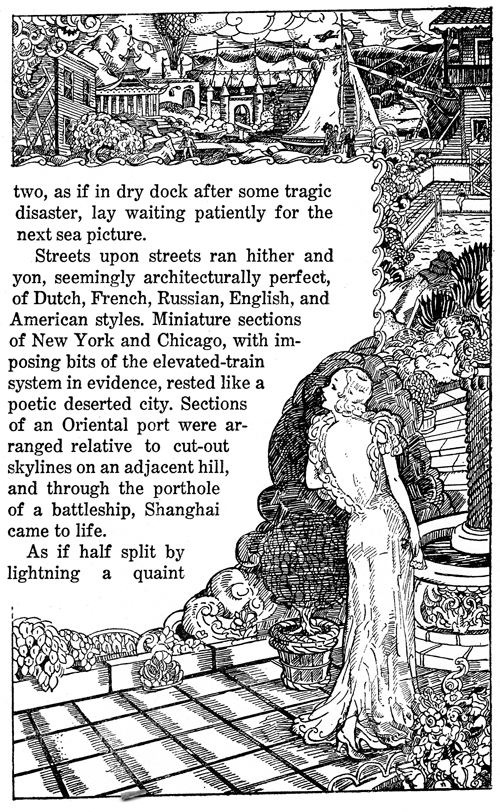 church presented its best side for good camera shots. Vines rambled artfully over false brick, but real pigeons swarming about the belfry tower ensouled it.
Miniature lakes, with huge wave-machines, rested placidly for some author’s command; and ponds with ducks and aristrocratic-looking swans idly waited the scenario department’s call to action.
Tanks for diving shots evidenced dry bottoms of tar paper warped by the blistering sun, while tall ladders and springing board gaped menacingly; and nearby, a real Red Cross hospital stood in its dignity, as if mothering the future action of the whole studio.
Cages housed various animals which cried for a trainer’s generous ration. Innumerable stables sheltered everything from thoroughbreds to comical mules with sway backs. Salt, plaster, and mica covered a barn to represent the snow of winter.
All these things could be seen again and again during part of the noon hour, with new dreams and visions secretly stimulating her imagination. And on the way back to the stage, she could saunter down a garden walk where rows of bungalows for the stars made her wonder what elegance the walls enclosed. At last she could stop beside the bootblack’s stand to share a bit of food with the comedy cat that played in so many pictures.
Arriving back on the set as commanded, at five minutes to one o’clock, to powder up so that the camera man wouldn’t crab about a greasy-looking face to focus upon, she could sit in a favorite corner to watch the late arrivals groan under the weight of a heavy meal, stretch themselves, and languidly start preparations for the afternoon’s work. Then she would wait and wait and wait for the assistant’s call, feeling a sort of stigma, which there was no particular reason to allow, for everyone killed her with kindness. Yet she was only the stand-in, just a girl with a makeup on, never to be photographed.