Charles Ray was a popular juvenile star in the 1910s and ’20s, but by the ’30s, his career was on the rocks, and he turned to writing. Here’s another in a series of offerings from his book, Hollywood Shorts, a collection of short stories set in Tinseltown.
*    *    *
Sour Puss
He was a freckled-faced little shaver with a large nose which gave him a complex long before he knew the meaning of the word.
“Aw, why do they have to call me Sour Puss, Mom?” he confided one day to his mother. “I can’t stand it any more. Someday I’m goin’ to run away from this town.”
“Now don’t talk such nonsense,” his mother consoled.
“I am! You’ll see. Why, it’s always Sour Puss this, and Sour Puss that. They make me sick! It ain’t no name fer anybody.” 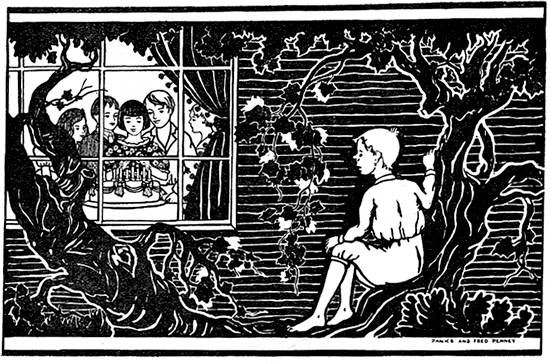 “Don’t you fret. Let them call you what they want.”
“But I am ugly, and I know it.”
“Why, you’re not! You just have rough-hewn features.”
“Well, why don’t they call me Micky, or Pal, or Slim, or any ol’ thing? But Sour Puss—that’s terrible, Mom!”
“It’s just a nickname. One of these fine days you’ll wake up and find that they don’t call you that any more. It just won’t fit. Now run along to the party and have a good time. Won’t you do that for mother?”
Noncommitally he bounded out of the house.
He went to the party, but he didn’t venture inside. For a while, he watched the gay activities from a knot hole in the barn. When the afternoon waned and the shadows fell, the party moved indoors. Then he circled the grounds like a spy, and from a great oak tree on the front lawn, watched the candles flare through the windows.

Neither the gayety, the dancing, the banquet that followed, nor the strawberry ice cream with chocolate cake five layers high could tempt him into an entrance. Instead, he climbed to the top of the oak and peered down through the thin foliage. With a broken jackknife, he carved a heart in a limb and cut his initials deep, together with those of the girl whom he would have liked to be sitting beside at the party.
Ugly and uninteresting to his companions, he finished high school and entered college; but from the moment his new acquaintances laid eyes upon him, he was dubbed Sour Puss, as surely as if a letter had preceded him, describing the insignia.
A marked sensitiveness caused him to fail in athletics. He failed in almost everything which called for a public appearance, excepting the college band.
He loved the band. It allowed him the privilege of attending the proms without mingling with the revelers; for he could never bring himself to impose his presence on any young lady for the close embrace of a dance. When the band master found out that he could sing, he was given crazy antics to perform during the refrains, being introduced as their basso buffo.
One day a lovely girl surprised him.
“Won’t you take part in our class play?” she pleaded.
For days he was thrilled with rehearsing his part, but it reacted like poison when he realized that he was looked upon as the reincarnation of Cyrano de Bergerac.
He played his part too well. Some practical joker got past the editor of the college paper with an article captioned “The Genius of Sour Puss,” which cut to the quick.
Instantly the student body coined a gag. the word genius became a campus expression to be accompanied by a wry smile and the wiggling of the forehead muscles.
The contest was on.
A hand over the nose indicated great length. Distorted eyes and tongues in cheeks aided everyone in declaiming his or her features to be the worst Sour Puss in captivity.
Cartoons became the fad. Drawings like ugly valentines appeared on sidewalks, on blackboards, and in the fly leaves of textbooks. The lavatory walls were decorated, suggesting the first efforts of a new art class.
Human endurance came to an end. The ugly duckling packed his belongings in two suitcases and made a surreptitious departure in the kindness the night extended.
For a while it was tough sledding, but he finally allied himself with a third-class band and toured the country in vaudeville.
Books were partly canceled, and finally the little band was stranded in Los Angeles. An out-of-the-way cafe in Hollywood saved a dozen boys from the bread line, but the duckling was happy. For the first time he noticed that his antics in the specialties were appreciated instead of just tolerated.
“Hotcha!” the band manager exclaimed one day as he flashed a contract to appear in a motion picture. “What a break! Not much money, but look at the publicity we’ll get. It’ll sure put the band on the map!”
A few short weeks later the members of the band stood on the rear end of an east-bound train, yelling mirthful, farewell statements to a lost sheep on the platform.
“Boy, ol’ clown!” the manager shouted as the train rolled away. “Stay away from them Hollywood dames, Sour Puss!”
The boy hadn’t heard any of the kidding. Unconsciously he waved them on their way, with a secret in his bosom which expelled all else. A deported actor had left a vacancy which gave him a break he could not yet appreciate. 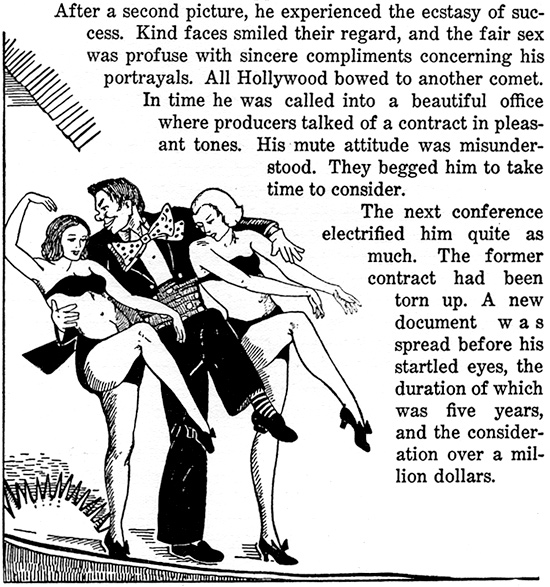 He signed with the producer’s gold pen and a shaking hand.
After a luncheon in his honor, he strolled down Hollywood Boulevard in a mental stupor. His feet guided him into a telegraph office, and his hand addressed a message to his mother. After to express himself openly, he finally wrote:
SWELL LETTER FOLLOWS
Hurrying to his lodgings, he spent an hour writing the longest letter he had ever composed. Then he stuffed it into a small box with postage enough to urge Uncle Sam into speed.
“And what do you think, Mom?” the last line stated. “They don’t call me Sour Puss any more. I got a new name. They call me comedian.”