Charles Ray was a popular juvenile star in the 1910s and ’20s, but by the ’30s, his career was on the rocks, and he turned to writing. Here’s another in a series of stories from his book, Hollywood Shorts, a collection of stories set in Tinseltown.

*    *    *
The Double’s Cross
“You’ll pull through all right,” the doctor lied.
“Yes, I know I will,” a girl answered in the same forced tones that he had used.
The nurse patted her cheek. “Yes, the doctor’s convinced,” she parroted, smiled mechanically, and departed.
In a stunt which was just a little too much for the human frame, the double had replaced the star. Now she lay inert on a hospital bed with a white face and a broken bone somewhere; the doctor wouldn’t designate the location. From that she concluded that it was her back. There were severe, sharp pains to contend with if she so much as moved an inch or two.
The hospital room was filled with flowers. The tables were heavy with them, and huge vases lined the floor like a garden. Gorgeous red roses, pink ones, white ones, and some as yellow as the sun, shed dewdrops of sympathy. The studio had sent most of them. 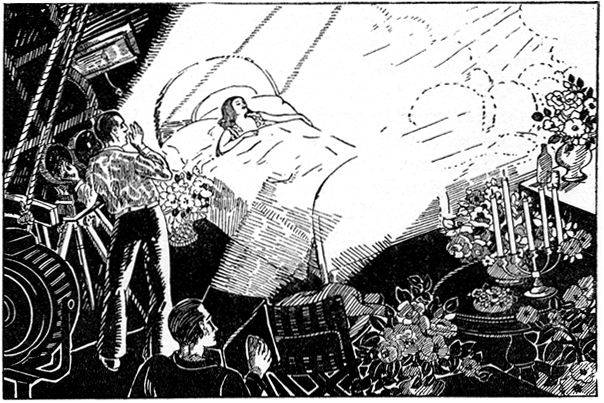 The yellow ones came from the star for whom she had doubled in the stunt. Each afternoon for the last three days, the actress had come to visit her and remained at the bedside for hours. At times, she held the invalid’s hand; and when tears welled in her eyes, she feigned to look out of the window while wiping them away, and spoke of the sunshine outside.
But the star wasn’t to blame. No one was. Stunts were demanded by a waiting public. The age was speedy, the populace neurotic, and the show must go on.
The girl’s mind stopped arguing about the circumstances of her injury as the pain in her back increased.
The morning had been a long one. A dreaming feeling was enveloping her, and a ringing had started in her ears, like great Sunday-morning church bells. Against her will, objects about the room began to swing asunder.
Occasionally her blinking eyes reestablished the objects; but they sprang out again, as if on rubber strings, and commenced weird movements with new dance partners.
She discovered the trick of closing one eye to stop the kaleidoscopic show. Her reflection was plain in the polished surface of the water jug; and it relieved her to know that her face wasn’t distorted. Only her eyes seemed to be covered with a film, whenever she could focus them at all.
Shortly, a mist started covering everything in the room, like fog effects she had encountered in picture making. Then, oddly to her, she saw a man on a high platform shouting for more fog. Of course, it was the director, calling to his assistant, trying to improve the scene with more smoke pots which represented the fog.
Yes, she could see more clearly now. They were making a scene for a picture she had been working in—a retake. They were using the big studio gates as a background. But the gates weren’t really familiar. They were wider by far, and a great deal taller than any she had ever seen. They were painted to represent gold, a lot nicer than the ones at the Metro-Goldwyn-Mayer Studios.
Presently the administration building came into view. She saw someone hurrying in her direction, shouting that there was plenty of work for everyone, that they should go inside and register. Everything was strange; it had never been so before.
“They want you for a part,” the kind-faced attendant informed her.
“You must be mistaken,” she answered confidently. “Not a part. You must mean a part doubling, don’t you?”
“No,” the man assured, “you’re through with that work.”
As she moved past the doorman, she turned back to leave a message with him; but he surprised her by anticipating her thoughts.
“I’ll tell your mother and Mr. Wayne where you are,” he stated omnisciently.
The inside of the building was so large that she could not see the end of the halls. Their perspective reached to infinity. Immediately on her right and left were colossal doors. The most beautiful had a name on it which she could hardly distinguish—a Mr. Gold something-or-other.
Then she instantly felt stupid, remembering about the merger. Everything was under one head now. That wasn’t Mr. Gold something-or-other inscribed on the first door. It was Mr. God. He was the new producer.
The next instant the hospital room faded in over everything. The ocean waves of monotony started annoying her again. Her parched lips seemed to curl, swelling up with an intense heat.
“Water!” she cried fiercely, or thought she did.
Bestial forms ran into the room, forming themselves in lines pruriently against the walls. To block out the hideous images, she closed her eyes tightly; but a frightening ptosis compelled her to aid the levator muscles by holding her eyes open with her two fingers. An increasing stomatitis caused her to grind her teeth, until the vise-like security indicated paralysic of the jaw.
Suddenly the whirling in her head stopped. A gradual relaxation ensued. Composure enveloped her. She heard the assistant’s tread; then saw him stick his head into the room to give her a call.
“Hey, Double!” he yelled goodnaturedly. “The Chief sent me after you. You all set to go again? He’s ready for that big scene now. Feel okay about it? Let’s step on it. This new director’s sure speedy, an’ rarin’ to go. he claims that he’s got a new stunt that nobody in the whole world has seen. Stage two.”
Peacefully she watched jolly scene-shifters enter and move the walls of her room away.

< Read "Once a Baby" | Read “Writer’s Cramp” >
If you enjoyed this post, please consider
supporting Cladrite Radio on Patreon