365 Nights in Hollywood: Synthetic Scenarios ⋆ Cladrite Radio
Skip to content
Jimmy Starr began his career in Hollywood in the 1920s, writing the intertitles for silent shorts for producers such as Mack Sennett, the Christie Film Company, and Educational Films Corporation, among others. He also toiled as a gossip and film columnist for the Los Angeles Record in the 1920s and from 1930-1962 for the L.A. Herald-Express.
Starr was also a published author. In the 1940s, he penned a trio of mystery novels, the best known of which, The Corpse Came C.O.D., was made into a movie.
In 1926, Starr authored 365 Nights in Hollywood, a collection of short stories about Hollywood. It was published in a limited edition of 1000, each one signed and numbered by the author, by the David Graham Fischer Corporation, which seems to have been a very small (possibly even a vanity) press.
Here’s “Synthetic Scenarios” from that 1926 collection. 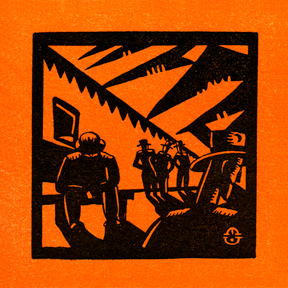 It was just seven-forty-five.
The tiny Inn, partly covered by a large pepper tree, seemed to lean against the studio wall. The coupe came to a sudden stop in front.
Betty, the taller, hopped out, a cold November wind greeting her. The expensive monkey-fur on her heavy black and graceful dress tickled her neck. She looked unusually fresh this morning. Her gray humorous eyes blinked in the cold, and her white shiny teeth almost chattered. Her rouged lips seemed to lose of their brilliancy as she stood waiting on Ann.
Ann, with dark brown eyes and long lashes, was having trouble dislodging a silken cord of her dress which had caught on the emergency brake handle.
The stools at the counter were filled with electricians, grip-hands, assistant cameramen, second assistants and office boys. They found places at the small table in the corner by the door.
“Gosh, it’s chilly,” Ann shivered.
“Yeh, something like South America.” Betty expected a laugh, but only got a glare from Ann.
Ann was reading Barney Google in the paper.
“Johnny,” called Betty to the office boy, “will you please light the stove in our office when you go in?”
He muttered something which sounded like yes with a mouthful of doughnut.
The studio displayed some signs of life by the time Ann and Betty had taken off their hats and stood rubbing their hands over a small gas stove, which should have been in a telephone booth.
By a quarter to nine both girls were seated at their desks with letter openers, stripping the edges of many bulky envelopes, which had been dumped on the center table by the mail boy.
Their day’s work had begun.
It was like this every day for six days a week.
They were scenario readers de luxe, as one producer had called them.
After reading a scenario—as far as possible—they typed brief outlines of the story on small cards which were indexed and filed away in the steel cases which lined the walls.
Their daily mail was never less than fifty stories. Sometimes it reached the amount of two hundred. And they came from all parts of the world.
“That was the interesting part of it,” Betty had once said, while reading one from India.
“Yes, that may be, but why do people who live in foreign countries always write about this country?”
Ann waited for Betty’s response.
“You’re better at riddles than I am.” And with that Betty started another story entitled, “Sadie, the Sinner.”
She finished the first paragraph with an effort. The little card was already inserted in her typewriter. She then wrote a little brief outline of the entire story from the first paragraph.
Ann had been watching her.
“What was this one like?” she asked.
“Just one of the synthetic ones,” Betty giggled.
“What do’ye mean—synthetic?”
“Same as synthetic gin. Darn rotten imitation of the real stuff. Something like near beer is to the honest-to-goodness lager. Leaves a bum taste in your mouth after reading—in this case.”
“Oh,” murmured Ann.
Silence.
Ann was thinking. Betty was reading another would-be scenario. This time it was from a housewife in Iowa, who had given her efforts the thrilling title of, “Her Mother’s Only Daughter.”
“That’s a good idea of yours,” Ann said finally.
“What?”
“The synthetic stuff.”
“It sure is the fake labels, kid.”
“Never mind the thing you’re reading now, tell me more about that idea of yours.” Ann had put down the scenario she was holding, and waited for Betty to begin.
Betty gladly dropped her manuscript on the desk and turned to face Ann.
“Well, to begin with, if I remember correctly, gin is an aromatic alcoholic liquid flavored with juniper berries. A scenario is the sketch of a plot or chief incidents of a play. Now then, ninety per cent of the things we receive in here are poorly constructed stories of photoplays already being shown on the screen. The birds who write these things spend hours in theatres and then go home to pound this stuff out for us to paw through. See the connection?”
Ann nodded in approval.
Betty was figuring with a pencil on a scratch-pad.
“We receive from fifty to two hundred scenarios a day, which is an average of forty. This is two hundred and forty per week, or twelve thousand four hundred and eighty a year.”
Betty stopped for a moment.
“How many did we find suitable last year?”
“Two,” answered Ann simply.
“There you have it! We found just two good stories out of over twelve thousand! Some job too!”
Ann nodded again.
“It looks like so much bunk—I mean all of this reading stuff.”
“Oh, I don’t know,” Ann mused, “every one of them has a chance. That’s fair, isn’t it?”
“But it’s such a small chance.”
“Take June Mathis, for instance. She is now one of the greatest scenario writers in the country. And I can remember when I was a little kid in Salt Lake City, she was the leading lady in a funny little stock company. Later, as she became popular they named a cigar after her.”
“Yeh?” interrupted Betty.
“Sure. And no one had any idea she would become famous as a writer when she first started out. I guess she was as bad as the rest then.”
“Must be sort of funny to have a cigar named after you and then become a scenario writer.” Betty laughed to herself.
They dropped the subject.
“What are you reading now?” Betty asked.
“I’ve read this same title a thousand times on that many scenarios. It is, ‘The Great Sacrifice.'”
“I’ve got another one of those kicky headings, such as ‘Only a Farmer’s Son,'” said Betty.
Silence.
Hourly the office boy carried away bundles of envelopes carefully sealed with a printed rejection slip reposing serenely inside.
< Read "Stealing Cupid's Stuff"
If you enjoyed this post, please consider
supporting Cladrite Radio on Patreon