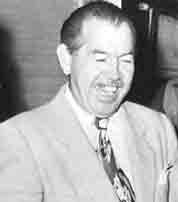 Jimmy Starr began his career in Hollywood in the 1920s, writing the intertitles for silent shorts for producers such as Mack Sennett, the Christie Film Company, and Educational Films Corporation, among others. He also toiled as a gossip and film columnist for the Los Angeles Record in the 1920s and from 1930-1962 for the L.A. Herald-Express.
Starr was also a published author. In the 1940s, he penned a trio of mystery novels, the best known of which, The Corpse Came C.O.D., was made into a movie.
In 1926, Starr authored 365 Nights in Hollywood, a collection of short stories about Hollywood. It was published in a limited edition of 1000, each one signed and numbered by the author, by the David Graham Fischer Corporation, which seems to have been a very small (possibly even a vanity) press. (Our copy of the book is numbered 146 and is inscribed to Louise Keaton, Buster‘s younger sister.)
Here’s “Gyping the Egyptian,” the first story in that collection.
TO
. . . . the publisher’s office . . . .

The quietness of the coming night lulls the street noises into a dullness. Autos glide down the ribbon-like boulevard, tires slapping the black pavement like a barber stropping his razor with swift, even movement.
Street lights appear like Christmas tinsel scalloped along the wide, straight boulevard. Show windows gleam at the passers-by.
It is a sultry evening. Something indigo about the heat. A storekeeper sprinkles the sidewalk in front before closing his shop for the night.
More automobiles passing now.
The silence is a light coat. Like the hand that switches off the power of a noisy trip-hammer. The shouts, the bangs, the hoots, the clanks, and the wows of the daytime are gone.
Hollywood has put on its night make-up—a lovable makeup of quietness, a slight touch of gray somberness with a bit of carroty pep.
A tall building of red brick and pearly marble gleams in the darkness. A massive electric sign flashes the words, “Hotel Christie,” from the roof.
Down below, almost hidden is the Egyptian Theatre. Sid Grauman’s offering of art—his own. An edifice dedicated to the cinema drama.
It is something different.
There is a strange atmosphere.
Something has been transplanted.
Everything is different.
. . . on entering the court one is suddenly shut out from the rest of the world . . . dim lights . . . an odor of smoldering perfumed powder . . . dreamy colors . . . weird . . . fantastic . . . we are awed . . . impressed . . . we see beautiful women against vari-colored giant walls . . . it is like a promenade on old faded batik . . . perhaps a bit of feminine coquetry in the architecture . . . imagine you hear the waters of the Nile . . . the dark sky sprinkled with stars like diamonds . . . the perfume of spices lingered . . . the moon is amazingly white . . . palms sway with a soft breeze . . . there is a sigh . . . you are speechless . . . you want to stand and gaze . . . you do stand and gaze . . . suppose a thick fog drifts in . . . there—even in the mist—is beauty . . . think of dark skinned maidens . . . a thousand years or more have slipped by . . . we stand on the shifting desert . . . watching dancing shadows . . . there is a tinkle of music . . . a pantomime . . . now we visualize an Oriental Fantasy . . . shining black slaves . . . more dim lights . . . incense . . . perfume . . . jewels flashing . . . carved walls . . . suggestion of the days of Pericles . . . men like Sophocles . . . Euripides . . . Alcibiades . . . Phidias . . . and Socrates would have been attracted . . . Plato would think a great deal . . . so would Bergson . . . Jules de Gaultier would have been greatly enthused . . . so would Nietzsche . . . bright rugs and shawls . . . great vases brilliantly painted . . . an old well . . . an oil lamp . . . perhaps Aladdin’s . . . the shuffle of bare feet . . . the rustle of the trees near by . . . the fragrance of flowers in the court yard . . . the soft splash of tiny falls . . . and the ripple of the fountain . . . a pleasant vividness in color . . . a peacock wanders vainly into view . . . it blends . . . Flaubert would have been fascinated . . . a nocturne L’oriental . . . a mirage . . . an amethyst in a grey distance . . . it is irridescence . . . it is subtle . . . a bit of lungwort in a luculite bowl . . . jasmine in a silver jar . . . it is like a small street in Cairo . . . tiny shops along the entrance left . . . and flags of the desert flying defiantly.
Read “The Whistler” >
If you enjoyed this post, please consider
supporting Cladrite Radio on Patreon