365 Nights in Hollywood: Enterprising Ernie ⋆ Cladrite Radio
Skip to content
Jimmy Starr began his career in Hollywood in the 1920s, writing the intertitles for silent shorts for producers such as Mack Sennett, the Christie Film Company, and Educational Films Corporation, among others. He also toiled as a gossip and film columnist for the Los Angeles Record in the 1920s and from 1930-1962 for the L.A. Herald-Express.
Starr was also a published author. In the 1940s, he penned a trio of mystery novels, the best known of which, The Corpse Came C.O.D., was made into a movie.
In 1926, Starr authored 365 Nights in Hollywood, a collection of short stories about Hollywood. It was published in a limited edition of 1000, each one signed and numbered by the author, by the David Graham Fischer Corporation, which seems to have been a very small (possibly even a vanity) press.
Here’s “Enterprising Ernie” from that 1926 collection. 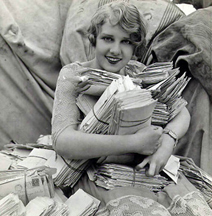 It was eight o’clock. The studio workers literally poured through the tiny entrance way—“For Employees Only.”
A few weeks before Ernie had slipped through and made his way around the mass of sets and stages to the offices of International Pictures.
It was a lucky morning for Ernie. The manager of the company was storming about his office boy being late again.
Ernie walked in calmly during the storm and proceeded to tell the manager that he was the one and only boy for the position and that he would be on time—always.
Ernie made a hit.
He got the job.
Ernie was about sixteen years old, had just graduated from grammar school and was a very handsome chap for his age. He had a mass of curly hair—dark brown, and nice even features.
Then there was his determined chin.
That meant a lot. He wasn’t afraid of anything—not even storming managers.
When the office boy arrived about forty-five minutes late, Ernie politely informed him that he was too late this morning, and that he would not find the exit gate crowded in going out.
That was over!
As the days went by, the office forced marveled at the manner in which Ernie went about his new duties. He had an uncanny knack of falling into everything with unusual ability.
Months passed.
Ernie was the wonder of the studio. He was now second assistant to the great manager, who had placed his “find” upon a pedestal of honor and proudly displayed him to rival producers.
Ernie was walking down the studio street one noon on his way to the lunch room, when he was accosted by a very dignified gentleman.
“Young man, could you tell me the name of the manager of the International Pictures company?” asked the man.
Ernie told him.
“I am one of his assistants, is there anything I can do for you?” Ernie asked.
The man waited a few seconds.
“Yes, you might help me. I am endeavoring to secure permission to secure the fan mail, which is directed here—at the studio.”
“I’m afraid that is impossible,” Ernie stated, “as the mail is destroyed immediately after the secretaries have copied the addresses.”
The man seemed disappointed.
“I would be willing to pay—for the letters,” said the man.
Ernie became interested at once. Now the man was talking business.
“I think I may be able to arrange the matter for you,” he said rather sternly.
The man lost his disappointed expression.
“I would be glad to reimburse you.”
“Just how are you going to use the letters?”
The man hesitated.
“I am the publisher of a blue book of the screen, and it is only natural that I should endeavor to secure the names and addresses of the motion picture fans.”
Ernie seemed pleased.
“How much would you be willing to pay for the letters?”
“How many are there a week?”
“Perhaps five thousand and sometimes more.”
“I would be glad to pay ten dollars a week.”
“You get the letters,” said Ernie.
The man seemed puzzled. Ernie came to the rescue.
“I am in charge of the fan mail for this studio and I will bring you the letters personally every week.”
The deal was closed, they shook hands and the man departed.
Ernie had no idea just how he was going to secure the letters, but he thought he could. Anyway, he could back out of the proposition if he failed.
But Ernie didn’t fail.
He went to the secretaries of the various stars and asked if he could collect their discarded mail.
His personality alone won him the privilege. They did not even ask him a question. He talked of other things immediately after their consent.
So Ernie had sold what anyone could have had by digging in the trash cans.
Every week he would secure a large canvas sack and cart his load of fan letters to the man with the ten dollars.
Enterprising Ernie.
< Read "A Fiend in Follywood" | Read “Subtle Suicide Stuff” >
If you enjoyed this post, please consider
supporting Cladrite Radio on Patreon